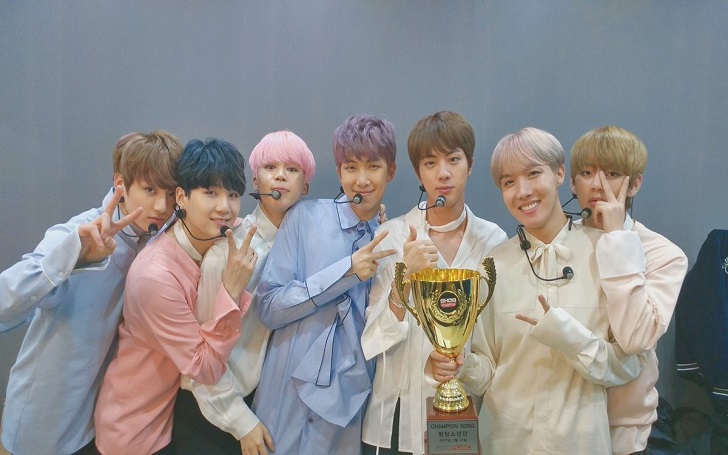 BTS has bagged yet another artist award at an American award show, this time at the '2017 Teen Choice Awards'!

Global sensation K-Pop group, BTS made history for winning a Billboard Music Award back in May, and the septet group just proved their worldwide superstardom once again by being named Choice International Artist at the 2017 Teen Choice Awards!

It was reported that the nominees for the '2017 Teen Choice Awards' 'International Artist' category included four K-Pop acts: BTS, EXO, Seventeen, and Monsta X. And they are the second K Pop group to win the award after Super Junior who won it in the year 2015.

The voting for the award began on August 13th and closed on the same day itself. Fans went on a rampage trying to vote for their favorite artist with the hashtag, "#ChoiceInternationalArtist" and "#TeenChoice" on Twitter, and in the end, ARMYs once again proved their immense dedication for BTS, as the boys were announced as the winners of the 'International Artist' award.

Just got home from school and BTS won a #TeenChoice award ohhmaagod! This is so fam~!!  *crywitharmys* @BTS_twt

#TeenChoice #ChoiceInternationalArtist #BTS
Thanks to all who voted! We did an excellent job, Army! Back to Soribada.We must assemble! pic.twitter.com/YF3OPpJwRz

That moment when 90% tweets under #TeenChoice are about BTS. pic.twitter.com/9iRmRZlFCe

The group’s win was announced by Bella Thorne with just minutes left in the 2-hour show. The 'Teen Choice Awards' is an annual award ceremony celebrating the year's accomplishments in various media such as music, television, sports, fashion, and comedy.

BTS is also set for an upcoming comeback in September this year. Congratulations!