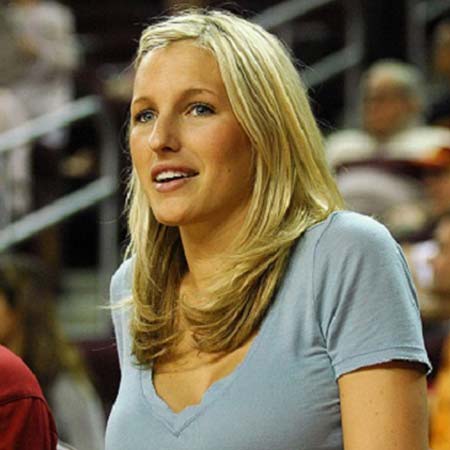 Brynn Cameron is a former professional American basketball player, better known as the ex-fiancee of NBA star Blake Griffin. She played basketball at the University of Southern California. The ex-couple made headlines during their custody battle of their two children together. Before dating Griffin, she was in a relationship with former NFL quarterback Matt Leinart.

Former professional basketball star Brynn Cameron was born Brynn Elaine Cameron on July 8, 1986, in LA, California, the USA to father Stan Cameron, and mother, Cathy Cameron. She has three siblings; brothers Jordan Cameron and Colby Cameron, and sister Emily Monroy. She spent most of her early childhood days in her hometown Los Angeles. Jordan is a former football tight who previously played football at USC. And Cameron is also an American football quarterback.

Brynn Cameron attended the Newbury Park High School where she developed an interest in basketball and started playing for the school. She finished her freshman season as the top scorer with 9.8 points per game.

Later, she enrolled at the University of California and graduated with a degree in Sociology where she also played with the college teams. Cameron holds an American nationality and belongs to the white ethnicity.

Brynn Cameron, who was the top-scorer in her freshman year, couldn't play most of the matches of her sophomore season during 2005-2006 due to her nagging hip injury. She underwent a second surgery at the end of the season; that shortened her season matches to 13 in which she hit 19 threes.

After graduation, Brynn Cameron started working as the interior decorator. In 2012, she got an offer as the sports marketing executive for Adidas and Gatorade.

Brynn Cameron's Net Worth And Salary

According to Dreshare, former Basketball star Brynn Cameron's net worth is estimated to be around $755k in 2019. But, her exact net worth is yet to be revealed officially.

On the other hand, basketball star Brynn Cameron's ex-fiance Blake Griffin has a whopping net worth of $60 million. According to Celebritynetworth, Griffin earns approximately $17.7 million salary annually.

Brynn Cameron is famously known for her relationship with Blake Griffin, however, she was previously in a relationship with Matt Leinart. She gave birth to her first child, son Cole Cameron Leinart whom they welcomed in 2006. They remained in the relationship for a short time from 2005 to 2006.

Following her breakup from Leinart, she started dating current NBA star Griffin during 2009. At that time, he was playing college basketball for Naismith College. The lovebirds remained together for around 8 years before they called it quits back in 2017.

They welcomed two children; Finley Elaine Griffin, and Ford Wilson Cameron Griffin. They were also engaged to be married, however, the irreconcilable disputes between the couple led them to call off their engagement. The relationship was reportedly turmoiled by the rumor of Griffin's relationship with Kendall Jenner.

CAPTION: Brynn Cameron and Blake Griffin with their son SOURCE: For The Win - USA Today

The former lovebirds involved in a nasty custody battle of their two kids following their separation. In February 2018, Cameron filed a lawsuit against Griffin for palimony. She claimed in her court documents that Griffin abandoned her and their children for his relationship with Jenner.

Later, it was revealed that the pair had decided to marry on July 28, 2017, however, Griffin blindsided her with a prenup agreement a month before their big day.

In April, Griffin denied the allegations that Cameron made on her lawsuit and requested Cameron's complaint "be dismissed with prejudice and in its entirety."

Months later in late July 2018, Griffin and Cameron settled their custody battle during private negotiations just hours before they were set to appear on the court. However, they didn't reveal the child support amount.

As of now, Brynn is leading a low profile life. Following their bitter separation, she has not revealed further about her personal life.