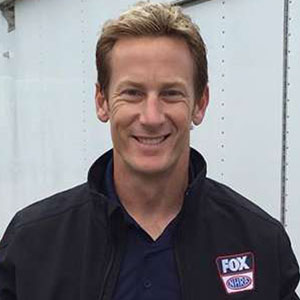 Known for his commentary skills, Bruno Ma s sel is an American TV host and drag racer. He is widely known for his work on Truck U. Ma s sel is known as a commentator for several racing events. In 2016, Bruno joined the cast of reality-tv series Garage Squad.

Ma s sel was born on 23rd May 1974 in Woodridge, Illinois, Chicago. Ma s sel holds an American nationality and is of White ethnicity. Ma s sel was raised in Illinois by his father, Bruno Ma s sel Sr. and mother Roz Ma s sel. His father was also a drag racing veteran who has also been named in the "50 most innovative individuals in drag racing."

Bruno enrolled in the University of Iowa from where he earned his bachelor degree in Business Administration. Besides this, information regarding his siblings and early childhood are not revealed yet.

Ma s sel initially started his career as a model after being discovered by a Chicago modeling agent. He was selected for a Ralph Lauren Underwear Campaign right after he met photographer Bruce Webber.

At the same time, he began handling his family business of Drag Racing side by side. Ma s sel participated in the IHRA National tour in his first full season winning the National Championship. In 2001, Bruno switched his career to the commentator of IHRA racing series on TNN and SPEED. Bruno later became the co-host of SPEED's half-hour weekly show, Truck U because of his knowledge of the motorsports.

Got some celebratory practice in while shooting an @nhra on @fs1 feature in Bristol, hoping for the real deal this weekend in Norwalk! @autogeekcom #summitracingnationals @mobil1_motorsports

The 45-year-old TV personality and drag racer has collected a hefty amount of money from his career which helped him increase his fortune. Although he has not disclosed his exact salary, sources estimated his net worth to be in $millions.

Likewise, the average salary of a drag racer ranges from $20,000 to $40,000 depending on experience. We can a s sume that Bruno might get paid above average looking at his experience in the drag racing.

Ma s sel is a happily married man and a father of two. He has been married to the love of his life, Dayna Purgatorio Ma s sel for a long time although the proper detail of their marriage is yet to be revealed.

The couple is blessed with two sons, however, the names have been kept private from the public. They are often spotted spending family time and a beautiful time.

The video shown below is a video of Bruno Ma s sel talking about how to ride a  turbo car.