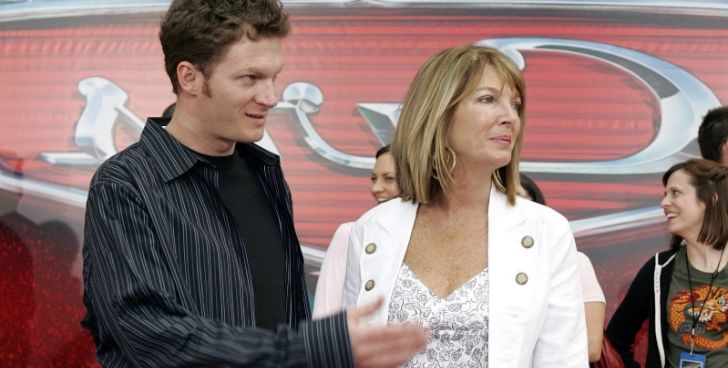 Brenda Jackson dies at the age of 65 following a battle with cancer.

The death of  Dale Earnhardt Jr.'s mother was announced by JR Motorsports where she worked for a long time alongside her children: Dale Earnhardt Jr. and Kelley Earnhardt Miller. The NASCAR world is in mourning and shared condolences to Brenda's family.

Miss Brenda, we thank you for the all memories and the laughter. The office won’t be the same without you. Rest in peace. pic.twitter.com/CtPxq6VNWH

Known for her wit, charisma and unparalleled ability to cut to the heart of any matter, Jackson became an instant favorite to her friends and colleagues at JR Motorsports when she joined the company as an accounting specialist in 2004. Her sarcastic musings and straightforward approach injected a brand of humor at JR Motorsports that became part of its fabric as it grew into a full-time NASCAR racing operation in 2006 and a championship-winning organization in 2014.

While Jackson’s career at JR Motorsports spanned 15 years, her presence in racing covered a lifetime.  She was one of two daughters and four children to legendary NASCAR fabricator Robert Gee, a Virginia native who built winning cars for many celebrated racers, including one up-and-comer from Kannapolis, N.C. named Dale Earnhardt.

Brenda Jackson's son wrote an emotional letter after the death of his mother. 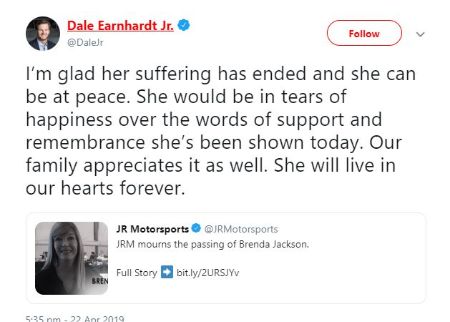 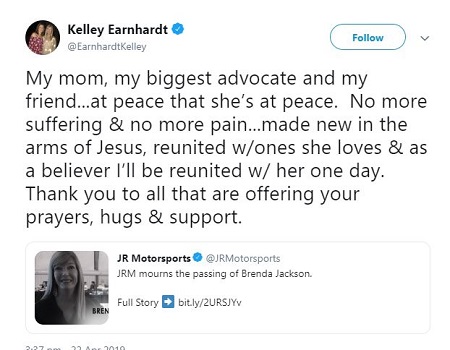 Late Brenda Jackson was the daughter of Robert Gee (NASCAR fabricator) who built various car racers including her husband, late Dale Earnhardt. She and Earnhardt got married in 1972 and welcomed Dale Jr. and Kelley who preferred to stay with their mother after the separation of Dale and Brenda.