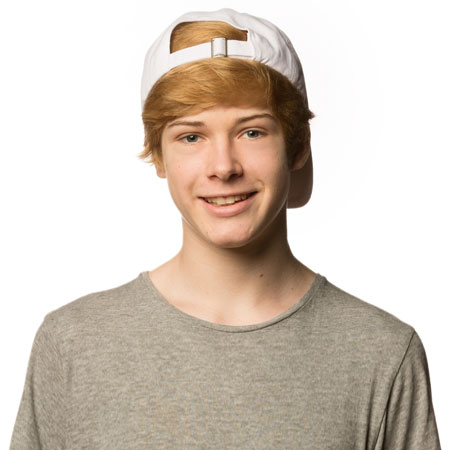 Blake Gray is a 20-year-old Instagram Star, YouNow sensation, TikTok star, and web personality, known for his Instagram account as one of the most followed junior celebrities. He was a part of the Impact MeetandGreet.Me a touring group and was also a member of the Magcon 2016 tour.

Blake Gray was born on January 9, 2001, in Cypress, Texas. Blake Gray is an American by nationality belonging to the white ethnicity. His mother Courtney is her role model. He was raised up in Cypress along with his older brother named Austin.  His father's name is Ronnie.

Born and grown in Texas, Blake Gray had an awesome childhood. He became an Instagram sensation as well as an outstanding star on musical.ly now TikTok, a video social networking app, at an early age. Soon, he started posting videos on YouTube, which later gained more popularity and several views.

He is active in a social video networking app named TikTok and has over 8.7 million fans following on his account. The videos that Blake Gray posted in this app are highly innovative and are liked by many people.  His ability to generate fresh content is highly commendable.

Blake Gray has made a good amount of money from his social media career which according to some source is estimated to be around $500k in 2021.

He then started dating Miss Teen America 2018 Olivia Occhigrossi. Sadly, the pair broke only after a year in 2019. As of Jan 2021, the TikTok star is in a relationship with social media influencer and model Amelie Zilber.

When it comes to his family and friends, Blake goes out of his way to make them feel happy and special. He is athletic as well; he is active in all kinds of sports. He loves to play several outdoor sports such as basketball, baseball, football, and skateboarding.

He loves going on frequent tours with his friends as it brings him even more closely to his fans. He keeps himself fit and fine traveling along with his group to spread joy. He has plenty of female fans who are crazy about him.

Despite his popularity, Blake Gray has expressed very few details about his personal life among the public. Blake has reached the age of 20 now. His birth sign is Capricorn. He has an elder brother named Austin Gray, whom he respects a lot. He cites his mother and his brother as a source of inspiration for all his success and achievements.

Loren and Blake both are popular faces of social media and because of the same surname often get curious about their relationship. However, they are not related.

Sorry ladies, but the handsome Tiktok star is not single. He is dating model Amelie Zilber.

3. How tall is Blake Gray from TikTok?

4. What college does Blake Gray go to?

Gray attends the University of Houston Athletics-Track and Field

5. How much is Blake Gray worth?