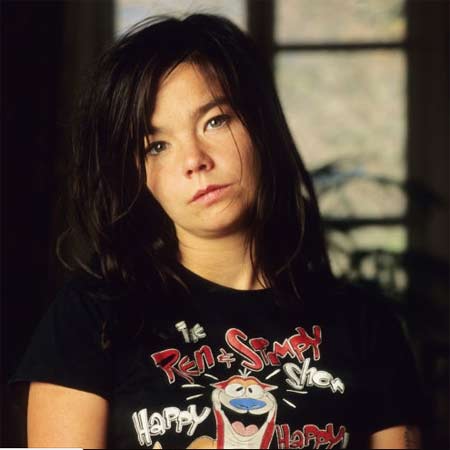 Bjork is regarded as one of the prominent faces in the world of music. The diminutive Icelandic pop star with such a distinctive and soulful voice has released a number of charter-buster albums like Debut (1993), Medúlla (2004), Volta (2007) and Biophilia (2011), each album including its own unique aesthetic and message. Prior to her splendid music career, Bjork has also worked on the big screen including critically acclaimed film Dancer in the Dark.

Bjork was born on 21 November 1965 in Reykjavik, Iceland. He is the son of Hildur Runa Hauksdottir and Guomundur Gunnarsson. Her father is a union leader and electrician while her mother is an activist. Her parents divorced shortly after Bjork's date of birth. Her mother denied staying at home as a housewife and left with Bjork. She later became the member of a hippie group.

Her mother for the second time tied the knots with the guitarist in Iceland. After spending most of her early days in the musical environment, Bjork already learned a lot at a very early age.  And by the age of 11, the artist started studying cla s sical music with piano.

He holds Icelandic nationality and regarding her ethnicity, she is a Caucasian. She has two siblings, a sister named Inga Hrönn Guðmundsdóttir and brother Arnar Sævarsson.

In the following year, Bjork released her first album titled Bjork. In the same year, she signed a contract with the Falkinn record label. After a couple of years, the singer joined an all-girl punk band called Spit and Snot. In the year 1979, the group formed a jazz fashion group called Exodus.

In 1886, the singer along with Magga Örnólfsdóttir, Bragi Ólafsson, and guitarist Thór Eldon formed the pop group the Sugarcubes. That same year, Bjork went on to marry Edon. The couple welcomed their first child, a son named Síndri Eldon Thórsson, on June 8, 1986. Just a year after, the two are divorced.

The group in 1988 released its first full-length album, Life's Too Good. Their final album was 1992's It's It.

Bjork built an illustrious solo career in the world of music with a number of charter buster albums and evergreen sons. Her first solo album Debut was released in the year 1993. The album also featured two singles Human Behaviour which was turned out to be her first international solo hit and another one is Big Time Sensuality. Both of them sold nearly 3 million copies all over the world.

The artist came back to London and released her second solo album Post which became the biggest hit reaching back to back on Pitchfork Media's "Top Albums of the '90s" list at No 21 and 20, respectively. The album also featured a number of UK pop hits and finally certified platinum in the United States.

Prior to her spending her music career, the singer has also worked on the big screen. In 2000, Bjork was a cast in the critically acclaimed film Dancer in the Dark along with Catherine Deneuve, David Morse, and Peter Stormare.

Her popularity gained further fame after she along with von Trier got an Academy Award nomination for the best songs I' Ve Seen It All. In 2001, she released her another hit album Vespertine. She subsequently released Medúlla (2004), Volta (2007) and Biophilia (2011), each album featured many hit songs and including its own unique aesthetic and message.

Bjork has an estimated net worth of around $45 million, in 2019. With such a successful music and acting career, Bjork is still considered as one of the versatile personalities in the world. The singer was also in the world tour for several times promoting her albums.

In 2020, Bjork was a cast in the movie Dancer in the Dark which became the biggest hit at the box office grossing over $416 million worldwide.

She has also been running her own YouTube channel with 354.33 subscribers as of 2019. It is also the major part of her net worth.

Bjork was once a married woman who for the first time married to her bandmate Thór Eldon in 1986. The couple welcomed their first child, a son Síndri Eldon Thórsson, on June 8, 1986. The couple, nonetheless, parted ways in 1987.

Following their divorce, the singer was romantically involved in several artists. She dated U.K. artists Goldie and Tricky (of Ma s sive Attack). In the year 2000, she met for the first time the artist responsible for the Cremaster project Matthew Barney. The couple after a few countships started dating.

The two also welcomed their first child, a daughter named Isadora Bjarkardottir Barney, on October 3, 2002. They also worked together on the movie Drawing Restraint 9 in 2005.

The singer along with two children and long term-boyfriend Barney currently resides in New York City.