Bibi Besch was an Austrian-American actress known for her stage as well as film and TV roles. She was best known for her role Dr. Carol Marcus in the movie Star Trek II: The Wrath of Khan. Similarly, she was also popular for her performances in Who's That Girl, Steel Magnolias, Tremors and many more.

Bibi Besch was born as Bibiana Maria Köchert on February 1, 1942, in Vienna, Austria under the birth sign Aquarius. Bibi was the younger daughter of theater actress Gusti Huber and an Austrian racing driver Gotfrid Kochert.

Her parents divorced when she was a child and her mother married Joseph Besch in 1946. She took her stepfather's last name. Besch spent her early life with her elder sister Christiana Barbara Kochert and half-sisters Drea and Andre.

Besch completed her graduation from Horace Greely High School in 1959. Later, she went to the Connecticut College for Women but she dropped out and moved to New York City to pursue a career in acting.

Bibi Besch started her career in 1976, playing the role of a German Woman in the TV film Victory at Entebbe. After that, she appeared in the horror movie The Pack.

Similarly, she worked in the crime drama film Hardcore. Moreover, the actress also worked in some other movies such as The Promise, Star Trek II: The Wrath of Khan, Who's That Girl,  Tremors, Betsy's Wedding, and My Family that took her to the stardom.

In her active years, she shared her screen with the actors like Rex Smith, Paul Winfield, Stephen Collins, Alan Alda, Sam Shepard, Barbara Cason, and many more. Besch was the prominent part of the series like Streer Hawk, The Edge of Night, The Secret Storm, Dallas, Backstairs at the White House, Date with an Angel, and others.

Bibi Besch had a net worth of $29 million at the time of her death. She earned a huge amount of salary and collected a ma s sive fortune from her career that spanned for over two decades.

The major sources of her earnings were her films and TV series. Besides that, she also earned some part of her fortune from her endorsements deals, advertisements, and commercials.

The actress Bibi Besch married her husband Donald B. Mathis in 1965, however, the exact date and the details of her wedding ceremony was not available. 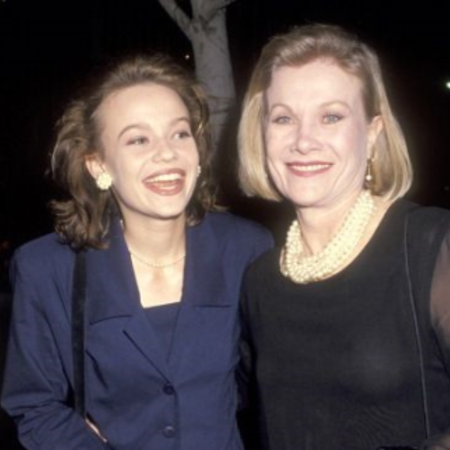 The couple shared a daughter Samantha Mathis together. After 8 years of their marriage, Bibi divorced her husband in 1973.

The gem of the Hollywood, Bibi Besch died at Daniel Freeman Hospital in Los Angeles on Saturday, September 7, 1996. She died from complications due to breast cancer. She was just 54 years old at the time of her death.