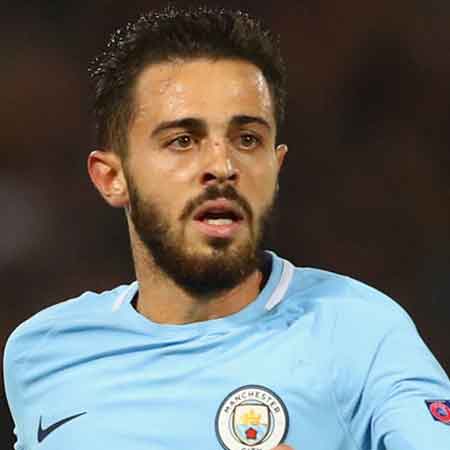 Bernardo Silva is an attacking right-sided midfield player who has established himself as a consistent performer. The footballer is widely known for his movement, dribbling skills, and sweet left foot. He currently plays for both English top flighted club Manchester City and the Portugal national team. Internationally, he represented Portugal at U19 and U21 levels. During his career with the club Monaco, he showed the great potential and scored 22 goals in 86 appearances.

Bernardo Silva was born Bernardo Mota Veiga de Carvalho e Silva in Lisbon, Portugal, on 10 August 1994, to Maria João Mota Veiga. Regarding his nationality and ethnicity, he is a Portuguese. He attended the English-speaking school in Lisbon.

The footballer started his early career in Benfica at youth level when he was just eight and gradually developed his formidable skills playing until 2013. With the club, he also won the 2012–13 Portuguese Juniors Championship.

Bernardo Silva later joined Benfica B playing his first game for the club against Trofense during the 2013–14 Segunda Liga, on 10 August 2013. For his finest performances for Benfica B, he was named the Segunda Liga Breakthrough Player of the Year (2013–14).

On 10 April, Silva netted two goals in a 3–0 away victory against Caen in a Ligue 1 match.  He scored eight goals and provided nine assists for the club in the 2016-2017 season. The footballer also helped the team to leap to the first level.

On 26 May 2017, Silva made his move to English giants Manchester City signing a five-year contract for a reported fee of  €50 million ($58,660,650). He registered his first UEFA Champions League goal for the club in a 4–0 away victory against FC Basel.

He gained praise from the manager and teammates after he netted the solitary winning goal against Chelsea at home.

Bernardo Silva was the part of the 2013 UEFA European Under-19 Football Championship and played one of the key roles for the team to reach to the semi-finals. For his performance in the tournament, he was listed in top 10 talents player under the age of 19 in Europe.

Silva played his first senior game for the Portugal national football team in a 0–2 friendly beat to Cape Verde in Estoril, on 31 March 2015. He scored for the first time for Portugal U21 team in the UEFA European Under-21 Championship's semi-finals against Germany U21.

The playmaker missed Portugal’s Euro 2016 triumph due to his injury. He will appear for his nation in the 2018 FIFA World Cup.

Bernardo Silva's Net Worth And Salary

Bernardo Silva has gained a hefty amount of money through his illustrious career which is speculated to be around $3 million, as per some reliable online sources. His estimated weekly salary is £110,000 ($1.8 million).

Bernardo Silva is yet to be married. He has been dating a French and Portuguese descent model, Alicia Varrando. The two started their relationship in the year 2016 when the footballer was still a Monaco player.

CAPTION: Bernardo Silva has been in a relationship with his girlfriend model Alicia Varrando.  SOURCE: the Oyo state

Silva's girlfriend Alicia is half French, half Portuguese who graduated from California State University and earned a Bachelor degree in International Business in 2015. The duo frequently appears in public places.  He is active on social media.

Silva is a big supporter of Portugal club Benfica.

His amazing skills and techniques.