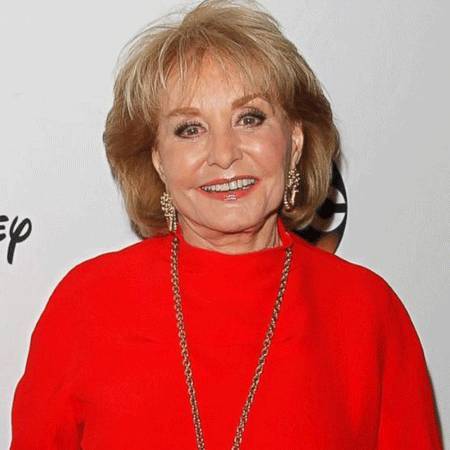 American journalist, Barbara Walters is best known as the 11-year star of the Today show and for being the first female co-anchor of a network evening news program. She wrote for CBS' Morning Show in the early 1950s and developed her trademark interviewing style through long-standing jobs on NBC's Today show and ABC's 20/20 throughout the 1960s and 70s. She is an absolute legend and her contributions to journalism will never ever be forgotten. She has been one of the most popular television personalities of this century.

Early And Education Of Barbara Walters

Barbara Walters was born on the 25th of September, 1929, in Boston, Ma s sachusetts in the United States of America. She is the daughter of Dena Seletsky and Louis Edward Walters. She is ethnically White and her nationality is American.

Her parents were both Jewish, and descendants of refugees from the former Russian Empire. Her paternal grandfather, Abraham Isaac Warmwater, was born in ?ód?, Poland, and emigrated to the United Kingdom, changing his name to Abraham Walters (the original family surname was Waremwa s ser).

Barbara Walters attended Lawrence School to the middle of fifth grade and attended public school when her father moved the family to Miami Beach in 1939. She went to eighth grade at Ethical Culture Fieldston School after moving to New York City.

Later, the family moved back to Miami Beach then back to New York City, where she studied at Birch Wathen School. She graduated from the school in 1947.

She later moved to the Sarah Lawrence College from where she received a B.A. in English. She immediately looked for work in New York City following her graduation.

Till now, Barbara Walters has worked for channels and shows like ABC News, ABC Evening News, Not For Women Only, 20/20, The View and Today. She has worked for huge channels such as ABC and NBC in her career.

Barbara Walters joined NBC's The Today Show as a writer and researcher in 1961, after a few years as a publicist with Tex McCrary Inc. and a job as a writer at Redbook magazine. She moved up to become that show's regular "Today Girl", handling lighter a s signments and the weather.

Barbara Walters has seldom minced words when describing the visible, on-the-air disdain her co-anchor Harry Reasoner displayed for her when she was teamed up with him on the ABC Evening News from 1976–78.

She is also known for her years on the Abc newsmagazine 20/20, where she reunited with former Today Show host Hugh Downs in 1979. She has appeared on ABC news specials as a commentator, including presidential inaugurations and the coverage of 9/11.

Barbara Walters was a co-host of the daytime talk show The View, which premiered on August 11, 1997. She was also a co-creator and co-executive producer with her business partner, Bill Geddie. She described the show in its original opening credits as a forum for women of "different generations, backgrounds, and views."

During her time in The View, she was able to grab two Daytime Emmy Awards for Best Talk Show in 2003 and Best Talk Show Host alongside longtime host Joy Behar, moderator Whoopi Goldberg, Elisabeth Ha s selbeck, and Sherri Shepherd in 2009.

Barbara Walters took the retirement from being a co-host on May 15, 2014. Although retired, she returned as a guest co-host on an intermittent basis throughout 2014 and 2015.

Since her retirement, she remained as a part-time contributor of special programming and interviews for ABC News until 2016.

She made an announcement that she would no longer hold Oscar interviews, but will still be working with ABC and on The View.

Her final on-air interview was of presidential candidate Donald Trump for ABC News in December 2015.

Barbara Walters' Net Worth And Salary

Barbara Walters' $170 million at present. She has earned a salary of $12 million per year in her career.

She was inducted into the Television Hall of Fame in 1989. She received a star on the Hollywood Walk of Fame on June 15, 2007.

She has won Daytime and Prime Time Emmy Awards, a Women in Film Lucy Award, and a GLAAD Excellence in Media award. She was honored with the Disney Legends award in 2008. The award is given to those who made an outstanding contribution to The Walt Disney Company. That same year, she received the Lifetime Achievement Award from the New York Women's Agenda.

On September 21, 2009, Walters was honored with a Lifetime Achievement Award at the 30th Annual News and Doc u mentary Emmy Awards at New York City's Lincoln Center.

She stands at the height of 5 feet 5 inches (1.65 meters). She is active on Twitter with millions of followers.

Barbara Walters has been married four times to three different men. Her first husband was Robert Henry Katz, a business executive, and former Navy lieutenant. She dated her boyfriend Robert Henry Katz and got married.

The wedding ceremony took place on June 20, 1955, at Plaza Hotel in New York City. The marriage was reportedly annulled after 11 months or in 1957.

She married her second husband, Lee Guber,  on December 8, 1963, and divorced in 1976.  Sadly, the relationship could not work out, as the couple ended their relationship as husband and wife. They have one daughter, Jacqueline Dena Guber (born 1968, adopted the same year).

She married to her third husband Merv Adelson, the CEO of Lorimar Television in 1981 and divorced in 1984. The couple remarried in 1986 and divorced for the second time in 1992.

She dated lawyer Roy Cohn in her college days. According to Roy Cohn, he proposed marriage to Walters the night before her wedding to Lee Guber, but Walters denied this. She explained her lifelong devotion to Cohn as gratitude for his help in her adoption of her daughter, Jacqueline.

In Barbara Walters' autobiography named Audition, she claimed that she had an affair in the 1970s with Edward Brooke, then a married United States Senator from Ma s sachusetts. However, it is not clear whether Walters also was married at the time. She said they ended the affair to protect their careers from scandal.

In 2007, she dated Pulitzer Prize-winning gerontologist Robert Neil Butler. She was close friends with former Fox News head Roger Ailes from the late 1960s until his death in 2017.

In 2014, Walters appeared on CNN's Piers Morgan Live, where revealed that not having more children is her greatest regret in life.

Barbara Walters announced on the May 10, 2010, episode of The View that she would be undergoing open heart surgery to replace a faulty aortic valve. She added that she knew for quite a while that she was suffering from aortic valve stenosis, even though she was symptom-free. The procedure to fix the faulty heart valve "went well, and the doctors are very pleased with the outcome," Walters' spokeswoman, Cindi Berger, said in a statement on May 14, 2010.

On July 9, 2010, it was announced that Walters would return to The View and her Sirius XM satellite show, Here's Barbara, in September 2010.