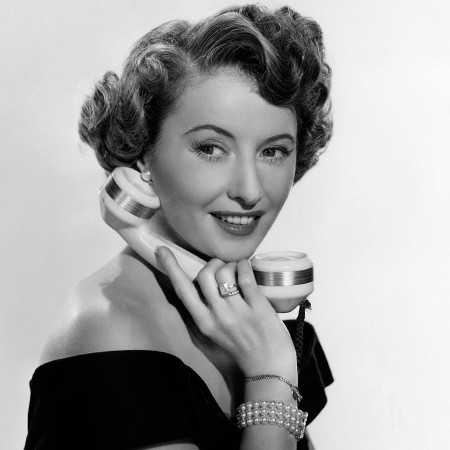 American actress Barbara Stanwyck is known to all for her exceptional acting skills and for being one of the highest paid women in American in the late forties. Barbara falls among the most celebrated actress of all times. Moreover, she also listated as the 11th all-time greatest female star by the American Film Institute.

Barbara was associated with Hollywood for 38 years and during the time, appeared in 85 films. Barbara was a strong personality in the acting arena doing outstanding movies like Stella Dallas, Double Indemnity, Sorry, Wrong Number and many more.

Born as Ruby Catherine Stevens on July 16, 1907, she was the fifth and youngest child of mother Catherine Ann and father Byron E. Stevens. Ruby’s parents were working class people. Ruby’s father was a native of Massachusetts whereas her mother was an immigrant from Nova Scotia, Canada.

At the age of 4, Ruby had to deal with troubling news; her mother had died of miscarriage complications after a drunken stranger accidentally knocked her off a moving streetcar. Not long after her mother’s death, Ruby’s father joined the work crew digging the Panama Canal and depressing as it may sound, he was never seen again.

Ruby was much impressed by her sister’s routines and during the summer of 1916 and 1917, Ruby toured with her sister and practiced the routines backstage. By the Tender age of 9 Ruby had started smoking heatedly.

Ruby never went high school but she attended the Brooklyn's famous school Erasmus Hall High School, however, she dropped out of school at the age of 14 and started working at a departmental store in Brooklyn where she wrapped packages.

Later she changed her job of filing cards at the Brooklyn telephone office for which she got a salary of $14 a week. Ruby desperately wanted to join the show business, she took the job of cutting dress patterns for Vogue magazine but she was fired later because of customer complaints. Then Ruby worked as a typist for the Jerome H. Remick Music Company.

In 1923, Ruby auditioned at the Strand Roof for a place in the chorus. Shortly after her 16th birthday, Ruby worked as a dancer in the 1922 and 1923 seasons of the Ziegfeld Follies, dancing at the New Amsterdam Theater.

Then Ruby worked as a chorus girl in nightclubs owned by Texas Guinan for several years. Later in 1926, Billy LaHiff, owner of a popular pub introduced Ruby to impresario Willard Mack who was at the time casting his play the Noose and thus Mack gave the chorus girl part to Ruby after an audition. Initially, the play was not a success but later Mack expanded Ruby’s part in order to incorporate more grief.

Finally, when it reopened on October 20, 1926, it became a huge success. The Noose ran on Broadway for nine whole months and had 197 performances. Later when suggested, Ruby changed her name to Barbara Stanwyck. Barbara coming from the name of her character Barbara Frietchie and Stanwyck coming from the name of another actress in the play; Jane Stanwyck. This is how Barbara started towards her acting career.

With a height of 5 feet and 4 inches and slender legs Stanwyck had become a star in Broadway after appearing as a lead role in 1927’s Burlesque.the play was a huge hit.

Later Stanwyck became an early member of the Motion Picture Alliance for the Preservation of American Ideals (MPA) which was founded in 1944. Barbara was nominated, Best Actress in a Leading role in the Academy Awards for four times for her roles in Stella Dallas (1938), Ball of Fire(1942), Double Indemnity(1945), Sorry, Wrong Number ( 1929). In 1941 her name star was located enlisted in the Hollywood Walk of Fame located at 1751 Vine Street.

Later in 1957, Barbara moved towards Television. She won an Emmy for her 1961-1962 series, The Barbara Stanwyck Show. Yet again she won an Emmy for the 1965-1969 Western series The Big Valley on ABC. By then Barbara became one of the most famous actresses on TV.

In 1966, 1967, 1968 Barbara was nominated in the Golden Globe Award, Best TV Star – Female for her role in The Big star. In 1967 Barbara earned a Screen Actors Guild Life Achievement Award In 1973 her name was enlisted in the Western Performers Hall of Fame at the National Cowboy and Western Heritage Museum in Oklahoma City, Oklahoma.

In 1981 Barbara received a Los Angeles Film Critics Association Career Achievement Award. In 1982 Barbara was awarded an honorary Academy Award “for superlative creativity and unique contribution to the art of screen acting”.

Then in 1983, she won her third Emmy for Outstanding Lead Actress in a Limited Series or a Special for The Thorn Birds. And in 1984 Barbara won the Golden Globe for Best Performance by an Actress in a supporting role in a Mini-series or Motion Picture Made for TV for The Thorn Birds. In 1986 Barbara won the Golden Globe Cecil B. DeMille Award then in 1987 Barbara received the American Film Institute Life Achievement Award.

Barbara had also appeared in many TV Series like The Barbara Stanwyck Show, The Big Valley, The Thorn Birds and many more that led her to be nominated for more than a dozen awards. Barbara has won an Academy Award, three Emmy awards, and two Golden Globes.

Barbara has also won Life Time Achievement awards. Undoubtedly Barbara Stanwyck is till date remembered for her exquisite acting and recently in 2013 throughout the month of December, forty of her movies were screened in a special “Stanwyck” tribute at New York City’s Film Forum.

Barbara Stanwyck was an American actress who had a net worth of $1 million, as per celebrity net worth. She had notable roles in several movies as well as TV series. As per some online sources, she was the highest-paid female actress in the U.S. in 1944, making $400,000.

Moreover, she was listed #11 on the American Film Institute's "100 Years of The Greatest Screen Legends." She has also voted the 40th "Greatest Movie Star of All Time" by Entertainment Weekly.

Barbara Stanwyck married The Noose co-star, Rex Cherryman in 1928 but the couple's marriage ended soon as her husband died at the age of 31 due to septic poisoning. Then on August 26, 1928, Barbara married her Burlesque co-star Frank Fay.

Barbara had an abortion at 15 which resulted in complications due to which she couldn't give birth to any child. On December 5, 1932, they adopted a son, Dion Antony “Tony” Fay. Later on December 30, 1935, Barbara divorced her husband Fay.

Shortly after her divorce, Barbara became close to fellow actor Robert Taylor while making the film His Brother’s Wife (1936). The couple dated for over two years and married in 1939.

They couldn't continue their marital relationship more than 11 years and they mutually decided to divorce in 1950. Barbara also had a romantic affair with actor Robert Wagner whom she met on the sets of Titanic( 1953), they had a four-year-long relationship.

Barbara Stanwyck's glorious years in Hollywood ended tragically on January 20, 1990, when she died of congestive heart failure and chronic obstructive pulmonary disease at the age of 82. She took her last breath at the Saint John's Health Center in Santa Monica, California.

She had wished no funeral service and in accordance to her wish, Barbara’s remains were cremated and the ashes were scattered from a helicopter over Lone Pine, California where Barbara had made some of her hit films.