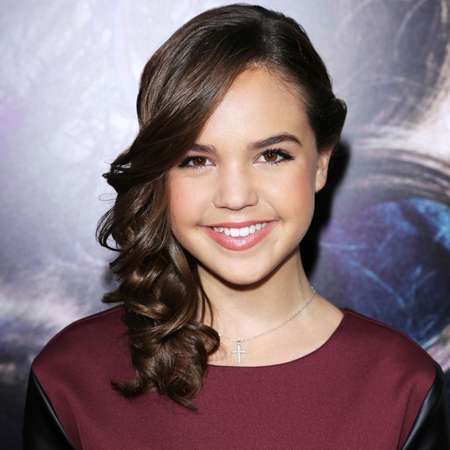 Bailee Madison is one of the quickly established young actresses in the world of acting. She gained widespread popularity following her finest performance in the 2007 movie Bridge to Terabithia. She has worked in a number of movies and TV shows. In 2018, she was a cast in the movie The Strangers: Prey at Night.

Bailee Madison is an American teen actress and YouTube personality, who has been hugely appreciated for her role as Belle Aaron in the 2007 Movie Bridge to Terabithia. She has also appeared as Snow White in Once Upon a Time.

This pretty beauty was born on the 15th of October, 1999 and at the age of 16, has managed to garner the attention of a huge number of fans around the world. Her mother is named Patricia Riley while the name of her father and other family details is not known. Madison belongs to American nationality and regarding her ethnicity, she is White American.

Born in Fort Lauderdale, Florida, this pretty beauty started her career on commercials.

Bailee Madison has appeared in commercials for Cadillac, SeaWorld as well as Disney and has been the national spokesperson of the charity Lemonade Stand Foundation. She made her film debut from Lonely Hearts where she played the role of Rainelle.

Her role in the Disney movie Bridge to Terabithia has been widely popular too. She has also appeared in Terminator: The Sarah Connor Chronicles and has followed it with The Last Day of Summer.

The other endeavors of this child actress include acting in Merry Christmas Drake and Josh and have also been featured in the film Brothers.  Her role in Brothers as Isabelle Cahill, she was nominated for a Saturn and BFCA Critics Choice Award.

Some of her other roles include acting in Law and Order, Wizards of Waverly Place, Don't Be Afraid of the Dark, and Snow White in Once Upon a Time. She has also appeared in Parental Guidance and the TV sitcom Trophy Wife too.

The actress was a cast in the TV series Good Witch from 2015-19. She played the role of Grace Russel in the series along with Catherine Bell and  James Denton as well.

According to celebrity net worth, Bailee Madison has an estimated net worth of around $6 million, as of 2019. Her major source of income is her work in movies and TV series.

The actress has worked in many commercially successful movies. In the year 2011, she was a cast in a romantic comedy Just Go With It which grossed over $214 million worldwide.

The personal life of Bailee Madison is also quite interested. The actress was in a relationship with music artist Alex Lange from 2016-18. The couple started dating in 2016. She and her ex-boyfriend Lange, nonetheless, parted ways after two years of dating. As of now, the actress is probably single.

Madison has been known to have hooked up with Zachary Gordon previously. The relationship of the couple was a rumored one and it was never actually made sure if the couple had dated or not. The news about their dating, however, hit the news tabloids at some instant. She has also been known to have dated Emery Kelly.

The couple had been together since 2013 and the relationship of the couple was getting along pretty well with no imminent signs of a split. Madison has never been known to be involved in the same gender relationship. The couple, however, broke up after a few years of relationship. She is not married yet and has no children yet.

Madison reportedly earns a net worth of 4 million dollars and has an annual salary of a whopping 470 thousand dollars according to the news tabloids.