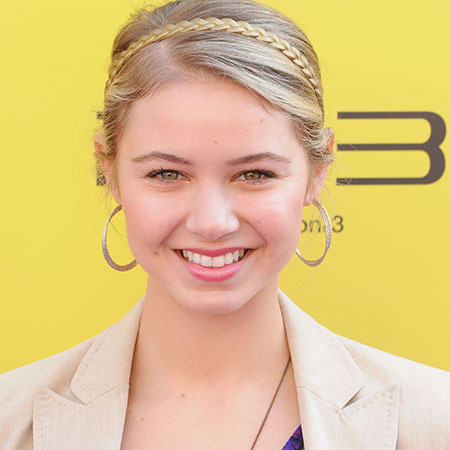 Ayla Kell, an American Actress, was born Ayla Marie Kell on 7 October 1990, in Los Angles, California, US. Her mother is Jane Kell while her father's information is not disclosed by any websites. Kell grew up learning ballet dancing and performed on professional theater Kodak Theater near her hometown in Hollywood, CA before fame. She is American by nationality and belongs to white ethnicity.

Ayla Kell learned ballet at Royal Academy Dance for 15 years and was trained at Los Angles Ballet Academy. She participated in the Youth America Grand Prix in New York and won the first place. She was once featured as a dancer at Valentino's International Carousel in Tokyo, Japan. Kell has made an appearance in several commercials for brands like Sony, Mattel, Pringles, and Disney.

In 1997, Ayla Kell made her first television appearance on 'Get to the Heart: The Barbara Mandrell Story', where she played as Young Barbara Mandrell. In 2004, she was cast in the episode of 'Malcolm in the Middle' as Kylie. The following year, she made an appearance in a dark comedy drama series of 'Weeds' as Chelsea in the episode: One and Only. Kell was also cast as Young Mia Jones in an episode of police procedural TV drama series 'Without a Trace,' in 2007. The next year, she played the role of Jade in 'Just Jordan' in the episode: Cool Guys Don't Wear Periwinkle. The same in 2008, she appeared as Chelsea Marsh in the episode of CSI: Miami.

In 2009, Ayla Kell earned her first lead role as Payson Keeler in Holly Sorensen's comedy-drama TV series 'Make IT or Break It.' The show ran until 4 May 2012, after completing season three with 48 episodes and other cast members are Josie Loren, Cassie Scerbo, Susan Ward, Neil Jackson, Candace Cameron Bure, Peri Gilpin, Chelsea Hobbs, Johnny Pacar, Anthony Starke and Dondre Whitfield. In 2011, Kell appeared as Olivia Livingston in Leverage and as Candace on 'Missing at 17' in 2013. In 2014, she portrayed Ashley on the Syfy TV film 'SnakeHead Swamp.' The following year she portrayed Lilah in Milissa & Joey.

Kell is not married yet and is dating TV actor Sterling Knight since 2014. Kell is living with her family in Los Angeles. Ayla Kell's successful career is blessed with a net worth of $ 5 million with an annual salary of $588,235. Her biography is also made available on sites like Wikipedia.