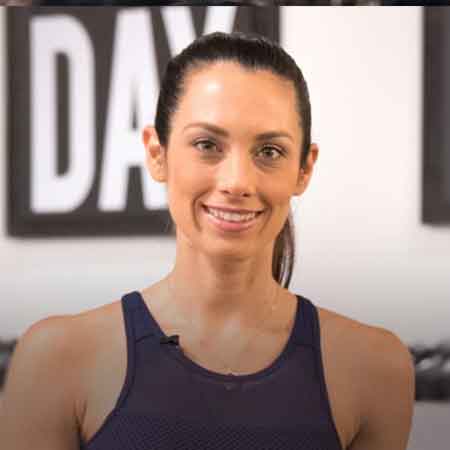 Autumn Calabrese, with a versatile yet prominent career, marked her name among successful figures. The Ohio-born aside from being a celebrity fitness trainer is also a national-level bikini competitor & cookbook author.

Along with her career, Calabrese manages time as a loving mother for her teen son, whom she shared with her ex-husband. From a personal trainer living on a paycheck to building her own empire in the fitness world, Calabrese surely has come a long way.

She is, particularly, famous for establishing the 21-Day Fix diet. She has also been the founder of Mighty Monnies Fitness since May 2006. Similarly, Calabrese is a certified personal instructor and a member of the Beachbody community of fitness trainers.

Moreover, she has gathered a huge number of followers on her self-titled Youtube account where she often posts dieting tips and workouts.

Born on 23rd September 1980 in Cleveland Ohio, United States, Autumn Calabrese is an American by nationality and has Italian ancestry. As of March 2021, she is 40 years old.

Autumn has not opened up much about her parents, reportedly, her father is in the restaurant business. Her family members are quite famous as well; she has a brother named Bobby Calabrese, a chef who is often seen cooking alongside her on her cooking show FIXATE. Her older sister Kelli Calabrese is a fitness expert, entrepreneur & TV presenter.

Calabrese attended Webster University in 1998 and received a degree in Bachelor of Fine Arts (BFA) in Field Of Study Dance in 2001.

She always wanted to become a dancer and from the age of 14, she began dance training. To achieve her dream she attended a small liberal arts school to study dance sadly her dancing career ended after a back injury. Due to this, it changed her direction and encouraged fitness exercises and diet.

Autumn Calabrese is a certified fitness trainer from The American Fitness Professionals & Associates (AFPA) and The National Academy of Sports Medicine (NASM).

Since May 2006, she serves in (also the founder of)  Mighty Monnies Fitness which is related to educating women on how to take care of their bodies and remain healthy and feel powerful in the middle of pregnancy and raising their families. She has also co-operated with bodybuilder Sagi Kalev for a body sculpting program, The Master's Hammer and Chisel.

Launched a new line of portion control Change My Plate

In October 2012, she launched a new line of portion control Change My Plate in LA so as to educate women about diet and eating quantity.

In 2016 Calabrese released Country Heat which brought fun to cardio fitness. Furthermore, her breakthrough came with a workout 21 Day Fix and follow-up 21 Day Fix Extreme. For the past two years, it has been Beachbody's top-selling franchise. And her cookbook FIXATE sold over 400K copies.

She also won the top 10 titles in several different national-level bikini competitions. She has worked as a trainer for her celebrity clients including Brooke Burke, Rachel Zoe, and Tom Bergeron.

Her workout programs have been featured in LA Parent, Muscle & Fitness, C Magazine, Daily Candy, and The Palisadian Post.

No doubt with immense success from the venture as a fitness trainer & release of e-cookbooks for health concerns, Calabrese summed up a hefty sum of money.

Online sources estimate that Autumn has around $10 million net worth in early 2022. Back in 2019, Forbes listed her fortune at $8 million. Allegedly, her yearly earnings account up to $2.5 million.

Moreover, Autumn collects considerable pay from endorsements as well; her Instagram (@autumncalabrese) with over 910K followers can pocket her $2,715 - $4,525 per sponsored post.

In addition to that, her popularity with YouTube videos also contributes to some of her earnings as well. Her eponymous YouTube channel Autumn Calabrese, created on September 27, 2013, has over 247K subscribers & a total of 18.65 million views. As per Social Blade, Autumn's YouTube channel has the potential to earn $5.1K per year.

The property spans 8,000 sq. ft. with a large gym & yoga studio along with Lutron and Nest lighting/sound systems, and a sophisticated security system with cameras. Calabrese bought the 1961-built mansion in April 2020 for $6.25 million.

In March 2020, the celebrity fitness trainer sold her  4,005-square-foot Studio City house for $2.35 million to Carl Daikeler, the Malibu-based CEO of Beachbody. The property first came on the market for the aforementioned price in December 2015.

Autumn Calabrese was married to a restaurant manager and together they have one son named Dominic whom they welcomed on 22 January 2008.

When her son was soon-to-be one year old, her business got a huge success and her spouse supported her in every way possible.

But when Calabrese had to move back to San Diego, her former husband wanted Autumn to solely focus on raising their child rather than focusing on her career. Their difference in opinion resulted in a divorce and brought an end to their married life.

As of 2022, she is a single mother to her son Dominic. There is not any information about her dating life and relationship status.  An avid Instagram & Twitter user, Autumn has over 968K and 64.9K followers respectively.