Ariel Winter's Shows Curves and Tattoos in a swimsuit 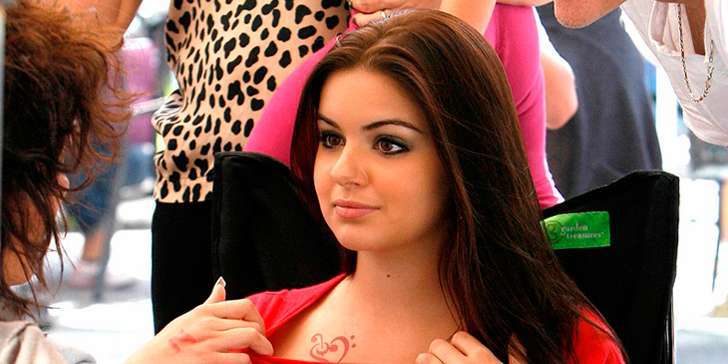 Ariel Winter Workman, born on January 28, 1998 is an American actress. She is best known as Alex Dunphy in the popular TV series Modern Family; she also has given the voice of the title character in the Disney Junior show Sofia the First. Ariel has been working since she was six and she used to do small TV shows then. The Modern Family became the turning point in her career. Winter and her Modern Family cast mates have won four Screen Actors Guild Awards for Best Ensemble in a Comedy Series. She is 18 years old now. She is currently dating Laurent Claude Gaudette. And it has been two years to their relationship. Her boyfriend is a musician, and they both have made several red carpet appearances together. They are just meant to be. Recently Ariel rubbished all the rumors about her getting married to Laurent in her 18th birthday. She is also fond of making tattoos and she has three new tattoos recently. She shared a close-up of her second and "most special" tattoo with her Instagram fans on Wednesday, explaining that the series of capital letters represented "the initials of five of the most important beings in my life: my nieces and nephew."

She is a curvy actress not afraid to show her curves every now and then. She recently flaunted her body in a swimsuit, showing off all her curves, tattoos she is fond of and not at all scared to break the status quo to a "bikini body". She has been very open about her body and does not support body shaming. She maybe just 18, but her salary is not common for any 18 year old. The modern Family star earns $75,000 per show and according to reports her net worth is said to be $7 million. That sure is some big amount for a teenager. She had some family issues, her sister filed case against her mother saying she has been abused physically and mentally and finally freeing her from their mother's guardianship.