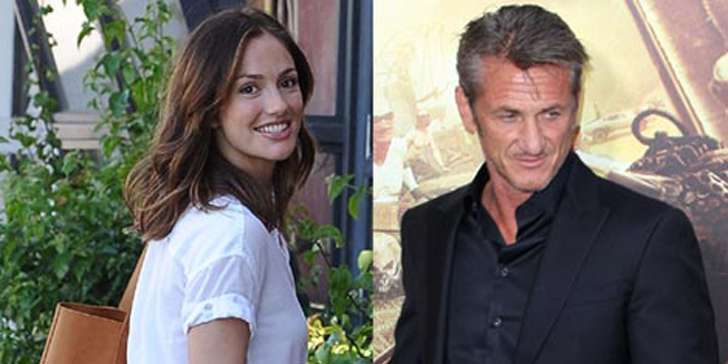 Actor Sean Penn is known for dating famous and beautiful female personalities in the past. From Madonna to Scarlett Johannson to Charlize Theron. He has been with the leading ladies in Hollywood and glamor world. Not long ago the news broke that Penn and Theron have called off their engagement and ended their one-year relationship. But now seems like Penn is already down the road again. Now rumors have it that he is be dating actress Minka Kelly.

A source confirms that Penn treated Kelly and a couple of her friends to a "very pricey meal" at Thomas Keller's elite eatery The French Laundry in Napa, California for the Almost Human actress' 35th birthday. That wouldn't sure be a problem to actor owing a net worth of $150 million. Sources reveal that he flew up to Napa with a pal on the night and met Kelly and her girlfriend for dinner.

The two apparently met at a benefit the actor threw for his Haiti relief organization J/P HRO. "That was their first date, but it was a group setting," the insider tells about the birthday feast at French Laundry. "It was more of a 'let's see how this goes.'" It went well, according to the source. "Minka and Sean got along great and had a great time, but it's unclear where it's going," the insider says.

This rumored "date" came just after the news of Penn and Theron had ended their year and a half long relationship. Some sources reveal that Theron was not responding his calls and texts and just cut off the ties. Meanwhile, Kelly has been linked in the past with having an affair with Captain America star Chris Evans, whom she first dated and broke up within 2007, and then dated again in 2013. She also had a long-term relationship with former Yankee shortstop Derek Jeter.  Currently, she too is single.

These two are only rumored for a single date, and have not been seen together anywhere else than that, but after Penn's pricey dinner treat, it is clear in some way that the two are actually dating or at least tried dating.But we still do not know if it is a boyfriend girlfriend kind of situation.