Are Miley Cyrus and Liam Hemsworth expecting a baby? The couple was re-engaged recently! 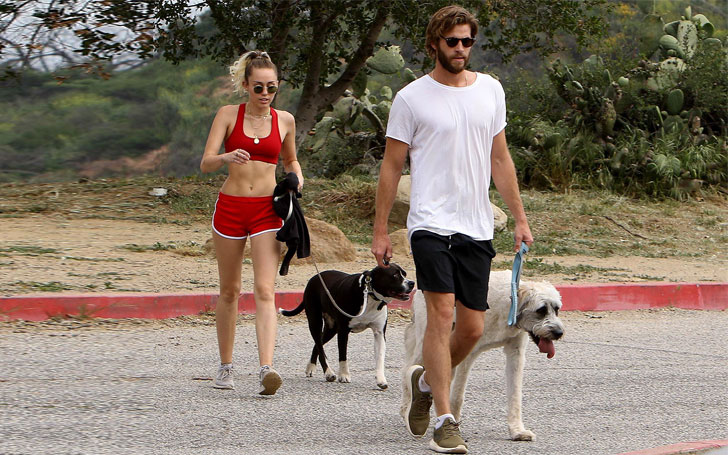 Hollywood couples had always surprised us with a twist in their love life. One recent but classic example is is that of Miley Cyrus and Liam Hemsworth.

24 years American singer and actress, Cyrus and 27 years old Australian actor are now once again one of the cutest Hollywood couples!

Are they secretly married?Is the couple expecting a baby? There are so many rumors going around that it is hard to catch them all.  However, we have all the answers here!

Are Miley Cyrus and Liam Hemsworth expecting a baby?

According to dailymail.com, one of the most happening couples in Hollywood, Cyrus, and Hemsworth, had married secretly and as per their source, and that they are planning to have a baby soon.

MailOnline exclusively captured the picture of their Malibu Estate with children park and playroom. The below video shows the five facts about Miley Cyrus.

Miley had turned one of the studios into play area where large size toy dinosaur is placed next to the pool. And because the area looks so much suitable for kids, the rumors of the re-engaged couple having kids, and possibly being already secretly married started to spur on.

Also read: Are Liam Hemsworth And Miley Cyrus Engaged Again? Why Liam Frequently Gets Back To Miley?

According to a source, Cyrus shared her pregnancy news with her closest friend and apparently, she was spotted doing extreme baby shopping. Not only Miley, even her mother, Trish Cyrus had been spotted at two baby store in L.A.

However, those were all rumors, and Miley Cyrus has neither been seen with a baby bump, or there are any other signs of them getting married!

Cyrus and Hemsworth first met on the sets of teen drama, 'The Last Song' in 2009. After three years of dating, they got engaged in June 2012. However, after a year, they broke their engagement in 2013.

Also read: Miley Cyrus And Liam Hemsworth Were Engaged In 2016. Are They Married Now?

But why did Cyrus and Hemsworth break up in the first place? Trying to give a reason, Cyrus in an interview in 2014 said:

"I love Liam, Liam loves me. It’s about finding yourself. I had to set myself free."

So, they broke up because they wanted to find their individuality? Well, that can happen when both of you are A-list Hollywood celebrities!

But Cyrus surprised all when she appeared on an Instagram post wearing her old engagement ring. The news of Hemsworth and Cyrus' re-engagement spread like wild-fire!

And it turned out to be true! Apparently, the couple got re-engaged in 2016. Since then, it's been dogs, hippie stuff, weed and success in both their lives! Being together suits them all kinds!