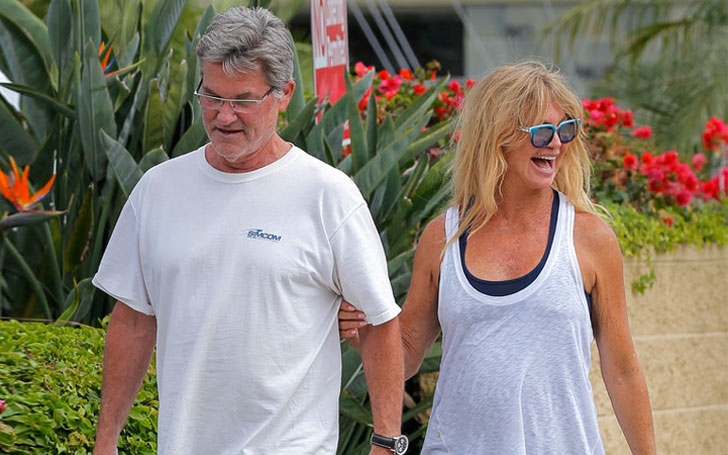 The veteran American actor, Kurt Russell shares one of the most exemplary relations in Hollywood with his 71 years old long-term partner, also a veteran Hollywood actress, Goldie Hawn. This iconic couple is an inspiration to all, however, interestingly enough, they aren't married.

Maybe, it's marriage that kills a relationship? Russell and Hawn are together for over 34 years and they are still in love more than ever! We have some exclusive details about this adorable couple!

Well, the answer is a big NO. Russell and Hawn are not married yet. However, there were rumors of their marriage which ultimately turned out to be false. Russell and Hawn, are living a three decades strong relationship, which may be hard to believe for many people as thirty years of togetherness in Hollywood is big deal. According to Hollywoodlife.com, Hawn said in an interview,

“A lasting relationship isn’t about marriage. It’s about compatibility and communication.”

In another interview with The Sun, the Oscar-winning actress told that they would have divorced if they had ever married. To add to that, she took the reference of their children and said

"About ten years into our relationship we asked the kids if they wanted us to get married and they said, ‘No!'"

Well, it looks like marriage is never the priority for the couple and they have proved it as they are together for over 34 years without marriage, have kids and still so much in love with each other.

According to popsugar.com, the couple had their first encounter on the set of 'The One and Only, Genuine, Original Family Band' in 1968's. However, they did not fall in love instantly as Hawn thought Russell was too young. At that time Hawn was 21 and Russell was only 16.

They started dating in 1983 while working on their second movie together, 'Swing Shift'.

At that time, they both were already married and had divorced from their spouses. Russell was already a father of Boston Russell from his ex-wife Season Hubley.

Hawn was already a mother of two kids from her former husband Bill Hudson, Kate and Oliver Hudson.

Recently the couple celebrated their 34th anniversary. The couple has a son, Wyatt Russell- actor and former professional ice hockey player, who was born on 10 July 1986.

In an interview with People, Hawn explained how she falls in love with her partner Russell, she said:

He was so good-looking, but he had no pretense about him. I could tell right away he wasn’t a womanizer,

Today they are sharing a happy and healthy relationship with her three kids kate, Oliver, and Wyatt along with their five grandchildren. Hawn and Russell have proved themselves as the Hollywood most committed couple and we must say they are happily unmarried.