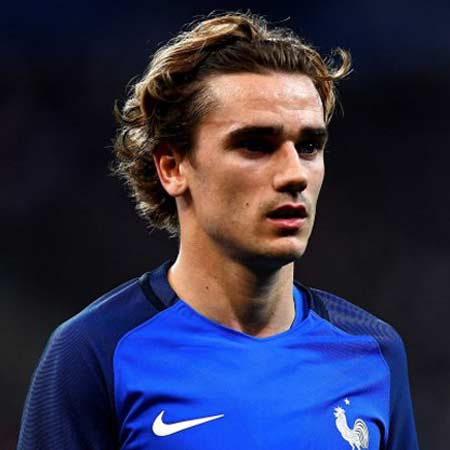 Referred as one of the best forwards of the generation Antonio Greizmann can play on either side of the flanks, as a centre-forward or a second striker. Unlike other French players, he spent most of his career at Spain in Real Sociedad and Athletico Madrid. Due to his impressive performance for Athletico Madrid in the year 2016, he was selected as nominees for Ballon d'Or in which he finished third just beside Ronaldo and Messi. He had also impressive Euro 2016 in which he scored six times and assisted twice leading Les Bleus to the final of the competition. He also won the Golden Boot in that tournament. Greizmann led Atletico Madrid to the finals of Champions league however they again were beaten by Real Madrid in the finals in the penalty shootout.

Known as baby-faced assassin due to his goal scoring ability and chocolaty looks his goal celebration during Euro 2016 became viral which eventually led to a dance move name after him.

He scored the first goal of the tournament in the 58th minute of the game in a penalty shootout.

Antoine Greizmann was born on 21st March 1991 in Macon France to father Alain Griezmann and mother, Isabella Griezmann.  His father lineage extends to Germany who was a Political figure in France and was former town Councilor while his mother was of Portugal descent. As a child Greizmann used to spent his holidays in Portugal.

Greizmann began his playing career with his hometown Club UF Macon. During his time at Macon, he gave trials in several clubs, but due to his small size, he was rejected.  In 2005 when he was on trial at Montpellier, he played a friendly match against youth academy of Paris Saint Germain.

Impressing on trial, he caught the attention of scouts of several clubs including Real Sociedad. He was called for trial in Sociedad and was later offered a contract.

After training for almost four years in club's youth system, he made his debut for the team in 2009-10 preseason campaign. After impressing in pre-season with four goals in five matches, Greizmann made his debut for Sociedad against Rayo Vallecano in 2-0 defeat at Copa Del Rey.

He made his league debut four days later in a 0-0 draw against Real Murcia.  He started and scored his first professional league goal for Sociedad against Huesca in a 2-0 win. At the end of the season Real Sociedad were promoted to Division 1 and Greizmann contributed six goals in 37 appearances for the team.

Next season he signed a professional contract with Real Sociedad with a release clause of $35million.  Greizmann who described playing in the first division of  La Liga as a dream come true scored his first league goal in a 3-0 win against Deportivo La Coruna.  Altogether in his four years in a first division playing for Real Sociedad, he scored 52 goals in all competitions appearing for 201 times.

On July 2014 Griezmann transferred from Real Sociedad to Athletico Madrid in fee believed to be around his release clause of $35 Million and signed a six-year contract. Managed by Diego Simeone, Athletico Madrid in recent years were La Liga and Champions League contenders playing a counter-attacking football with tight defense on the back.  Greizmann played his first competitive match for Athletico in a 2014 Supercup in a 1-1 draw against fierce rival Real Madrid.

On 21st December he scored his first league hat-trick of the career against Athletico Bilbao in a 4-1 win for which later that month was awarded player of the month award. He finished the season with 22 league goals in 37 games as Athletico finished third behind FC Barcelona and arch-rivals Real Madrid.

Greizmann started next season with a goal against Las Palamas in a 1-0 home victory. On 13th April 2016 in a match against Barcelona in Vicente Caldron on Champions league Greizmann scored both goals as Athletico eliminated Barcelona.

That year Athletico reached final of the Champions league eventually losing to Real Madrid in a penalty shootout. On the start of 2017/18 season there was huge speculation that Greizmann will move to Manchester United, but after transfer ban for Athletico Madrid he denied the rumors and chosen to stay at the club for one more year.

In his 205 appearances for Athletico Madrid, he has scored a total of 110 goals in all competitions.

Due to his youth career in Spain, he missed several of the youth matches for France finally making youth team debut for France under 19 on 23 February 2010 in a 0-0 draw with Ukraine. He then was selected to play in 2010 UEFA European under 19 Championship in which France ended as winners of the tournament.

Greizmann made his first senior appearance for France in International friendly against the Netherlands in a 2-0 home win. He was also selected in 23 man squad for FIFA Worldcup 2014. He started the first match of the World cup against in a 3-0 win against Honduras replacing injured Franck Ribery.

France hosted Euro 2016 and Griezmann was a regular starter for the team. France reached the final of the competitions losing to Portugal in 1-0 defeat. However, Greizmann won the Golden Boot as tournament's top scorer and also named tournament's best player with six goals and two assists. Altogether for France senior team, he has appeared in 51 games scoring nineteen goals.

Antoine Greizmann's Net worth And Salary

Antonio Greizmann has the highest salary among Athletico Madrid players. His salary is $272,210 per week. His net worth is estimated to be around $21 Million. He earns a large amount of money via his endorsements and has appeared alongside Harry Kane, Cesc Fabregas, Mario Gotze in the advertisement of Beats by Dr. Dre.

His estimated income from brand endorsements equals to be around $3 Million while his personal investments include $6 Million.

Greizmann also has a large no. of car collections which include Gran Turismo S worth $116,000. His other notable car includes BMW, Bentley and Mac Laren. According to some online sources, he owns a beautiful mansion in Madrid worth almost $2.1 Million.

"Greizmann" is actually German surname which he got from his father who is of German descent. During his growing days in France Greizmann used to be a fan of Olympique Lyon. He also gave a trial for Lyon but was rejected.

Antonio Greizmann is married to Erika Choperana what he calls as the childhood sweetheart. The couple tied the knot in June 2017 in a private event.  They have a daughter named Mia Greizmann. Greizmann has a private personal life and doesn't want the face of his child to expose in media.

He has a numerous tattoo on his bodies which includes a portrait of Jesus, a rosary with clouds and stars and the initials of his parents.

In November 2012 Greizmann was suspended for France for almost a year alongside some of his teammates due to disciplinary issues. They were found hanging in a nightclub in Paris during training time.