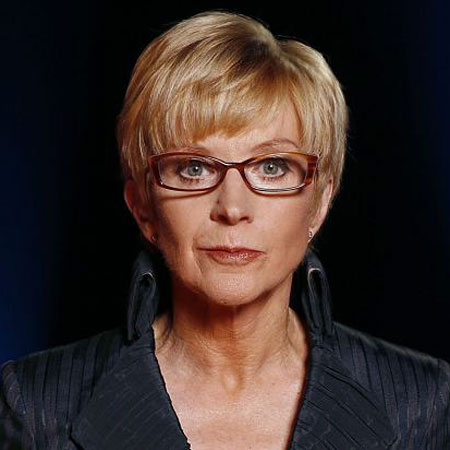 Anne Robinson is a personality who has made it to the heights of fame for having appeared as the hostess of the BBC game show The Weakest Link. She worked in the show for the duration of 12 years. Previously, she was famed for her work in Watchdog. She is best known for her acerbic style of presenting.

Anne Robinson was born on September 26, 1944, in Crosby, Lancashire, England. She was born to Anne Josephine and Robinson Wilson. Her father was a school teacher and her mother was an agricultural businesswoman.

She was enrolled in the Roman Catholic convent boarding school in Hampshire for her primary education. She was made an Honorary Fellow of Liverpool's John Moores University in 1996.

Anne Robinson started off her career as a chicken gutter and saleswoman before she decided to move into journalism. She started as a trainee in the Daily Mail and later joined The Sunday Times. She worked as a columnist and Assistant Editor of Daily Mirror and then moved to work in several other Briitish newspapers like Today, The Sun, The Express, The Daily Telegraph etc.

Anne Robinson career on television started as she became the panelist of Question Time. She won more fame for her work in Breakfast Time and has been known best for her television program Watchdog. She rose to more heightened name and fame for her 12-year long career as the host of the game show The Weakest Link.

Anne Robinson is an admitted alcoholic as her mother which caused quite a stir in her family life over the past years. She was married first to Charles Wilson in the year 1968. Charles’s family owned a poultry business. The couple was married for quite some time until 1973. In the divorce battle, she lost the custody of her only child Emma to her husband.

Anne Robinson was later married to John Penrose in the year 1980. The relationship of the couple ran its course for 27 years and ended up in a divorce due to “irreconcilable differences”. She has also published her biography, Memoirs of an Unfit Mother where she mentioned about her drinking problem.

Anne Robinson has a huge net worth expected to be about $45 million dollars. Her decade-long career in the journalism sector seems to be the major reason why her net worth and salary has increased exponentially over the years.