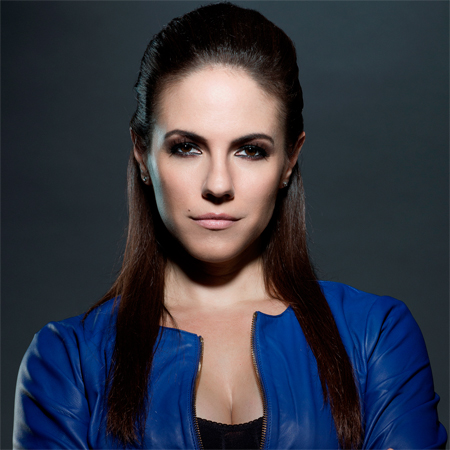 Canadian movie star, Anna Silk, 43, is an actress. She is best recognized for her portrayal as Bo Dennis in the television series Lost Girl. She became the winner of Canadian Screen Awards in 2015.

Anna Silk was born on January 31, 1974, in Fredericton, New Brunswick, Canada. As far as her ethnicity is concerned she belongs to North American and holds a Canadian nationality.

Silk is the daughter born to Peter Silk and Ilkay Silk. Her father Peter was an academic and mother Ilkay was a prominent actress, director, playwright, educator, and producer. Her mother was also Director of Drama at St. Thomas University. Her father is British and her mother a "Turkish-Cypriot-English expat".

She used to play rehearsals and watch her mother work during her childhood days. Her early theater work includes at least two productions with Theatre St. Thomas: Seven Menus and The Kitchen.

Silk attended St.Thomas University and completed her graduation with Bachelor of Arts degree in 1997. She has appeared in several commercials as a child.

Silk started her professional career in the field of acting in 1999. She first featured as Sabrina in the popular series, Daring, and Grace: Teen Detectives. She made her film debut as Headset Woman in the movie named Confessions of a Dangerous Mind.

Furthermore, Silk appeared in many other Hollywood movies and series including Lost Girl and Being Erica. In the popular television series Lost Girl, She was seen together with KJris Holden-Reid. Her role of Ca s sidy Holland in a TV series, Being Erica helped her to receive a Gemini Awards nomination during 2009.

In 2015, she was nominated for Golden Maple Awards for Best Actress in a TV series. She won a Canadian Screen Awards with her significant works in Lost Girl. She also played a flight attendant in a Canadian Nicoderm commercial.

Anna Silk's net worth is reported to be $6 million at present. Her salary is calculated to be around $450,000. She has received nominations for Gemini Awards and Golden Maple Awards and has won Canadian Screen Awards for her works.

She has worked in the movies and TV shows including Breakfast with Scot, Do Not Bend, Where the Truth Lies, Confessions of a Dangerous Mind, Wynonna Earp, Lost Girl: An Evening at the Clubhouse, Lost Girl: Con FAEdential, Top Chef Canda, and Being Erica.

Silk stands 5 feet 5 inch in height. She is currently residing in Los Angeles with her husband and children.

Anna Silk, 43, is a married woman. Her birth sign is Aquarius. She married her longtime boyfriend, Seth Cooperman. The couple first met each other at an actor’s workshop in Los Angeles in 2007.

The duo was engaged after an affair in 2009. They were married in a civil ceremony in December 2009. They renewed their vows in a Jewish ceremony in Fredericton after she converted to Judaism on April 10, 2011.

The couple was blessed with two baby boys who namely Samuel Jerome Cooperman and Levi Aaron. Their first child, Samuel was born in May 2013. The couple welcomed their second child Levi on May 13, 2016.

Anna and Seth seemed to be happy together. There are no rumors about their separation and divorce. She is seen active on different social media including Facebook, Twitter, and Instagram.