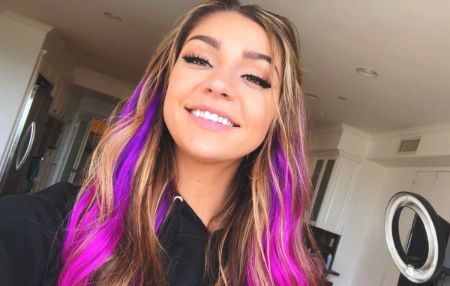 Social media personality Andrea Russett is known for her courage to come out as bisexual with an emotional post via her Instagram. Currently, she is popular as the host of the weekly talk series, Apologies in Advance with Andrea Russett.

Additionally, YouTuber turned host Russett is also an actress recognized for her roles in Expelled, Sickhouse, The Deleted, and Mike and Dave Need Wedding Dates. Also, she owns a clothing line, FLAWD.

Andrea Russett was born Andrea Rose Russett on June 27, 1995, in Fort Wayne, Indiana, the United States. Both of her parents, Mark William and Jacquie Russett are graphic designers.

The internet sensation Andrea holds an American nationality and belongs to the white ethnicity. She spent her childhood with her siblings, sister, Anna, and the brother, Anthony.

Until her junior year, Russett studied at a private Catholic high school. Later, she moved to California and attended an online school. During her final year, the she left her online studied and says:

"everybody learns differently and I don't learn by reading and writing a report. I need to be doing something to learn."

How Did Andrea Russett Become An Internet Celebrity?

At the age of 14 Andrea, she created a music video entry titled, "JUSTIN BIEBER ONE TIME MUSIC VIDEO" for a contest to meet the popular singer Justin Bieber in 2009. Unfortunately, her video did not win her entry but the video became viral and made her an internet celebrity.

Prior to this, Russett used to serve as a radio jockey in one of the local radio stations. Eventually, she signed a contract with a global network of content creators and brands on YouTube, 'Fullscreen, Inc.' in the year 2013 and moved to California.

That year, 25 years old social media personality even began designing her own clothing line and founded the brand FLAWD Clothing. The social media accounts for the line is inactive since June 2015 and its website does not exists as of August 2019. 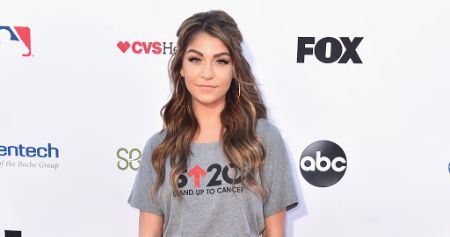 After achieving fame on internet, Andrea started her journey in Hollywood film industry. In 2014, she made an acting debut with the teen comedy movie Expelled. The same year, she appeared in the reality TV web series @SummerBreak.

Since 2015, Russett is a part of a media franchise, YouTubers React. Likewise, her other notable acting credits include movies and TV shows like Lovesick, Sickhouse, A Peculiar Tale, Mike and Dave Need Wedding Dates, Catfish: The TV Show, Escape the Night, and Guilty Party. Recently, she is hosting the weekly talk series, Apologies in Advance with Andrea Russett (2017-present).

As per the Celebrity Net Worth, Andrea Russett has an estimated net worth of $2 million in 2020. She has gathered all her fortunes from her films, series, YouTube, and Instagram.

Additionally, Russett is active on Instagram with 4.6 million followers. According to the Influencer Marketing Hub, she receives almost $9,258 to $15,430 per sponsor post with an engagement rate of 2.18%.

5 feet 2 inches tall actress Andrea is a member of LGBTQ community. She revealed that she is bisexual with a series of tweets on twitter in September 2018.

In order to clear her tweets sexuality and the fall-out with her best friend, Sandra Poenar, Russett wrote an emotional post on her Instagram discussing her friend's thoughts. 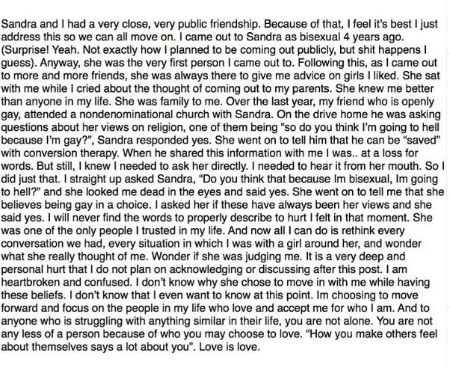