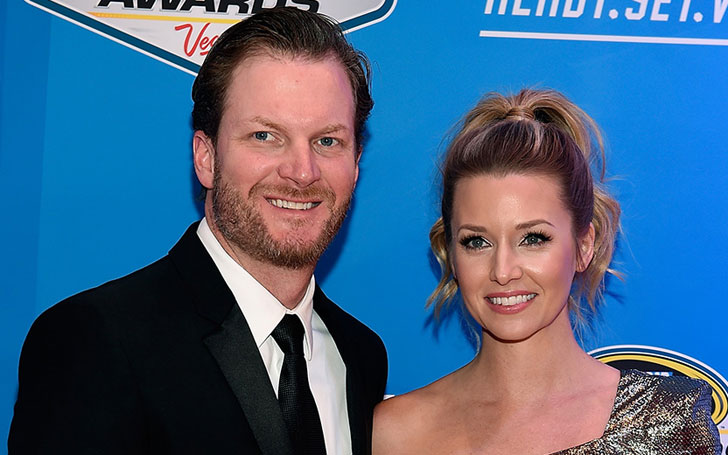 A key to the happy marriage is to never give up on each other. The popular interior designer Amy Reimann and NASCAR’s most popular driver Dale Earnhardt Jr are the perfect examples. The couple who married in 2016 after dating for several years, of course, had difficulties in the relationship but the fact that they never choose to leave is the main reason behind their successful relationship.

The couple is now expecting their first child together and is all set to experience the new responsibilities of life.

Amy Reimann and Dale Earnhardt first met in 2008 when the retired professional stock car racing driver hired the inter designer Reimann for his Mooresville, North Carolina home. At the time, she was working for Wakefield Beasley & Associates.

The two soon started dating, and Earnhardt proposed Reimann in June 2015 in a Lutheran church during their family trip to Germany.

The 35-year-old interior designer announced the big news via Twitter on 17 June 2015:

"I'm completely overwhelmed with love & joy. Happiest girl in the world! I love you so much @DaleJr."

Reportedly, Earnhardt and his sister Kelley Earnhardt planned the surprise proposal for Reimann.

The couple got married after a year and half years of engagement on 31 December 2016. They exchanged the vows in the wedding ceremony held at Childress Vineyards in North Carolina.

Also read: Race Car Driver Dale Earnhardt Jr. has a net worth of $300 million. Know about his income & family

During their wedding, the stock car racing driver faced difficulties in his career. He was diagnosed with concussion-due to which he missed his second half of the season in 2016.

Earnhardt later revealed that his wife made his life better after he was recovered and cleared to race:

“Amy changed my life. Amy’s really stuck with me through a lot of years and I’ve changed as a person. I think she’s been a huge part of that. I went from being very selfish and self-centered and just about what was good for me, what I wanted to do in that moment. [I] have grown to be more considerate, more caring, much happier. Everything about my life is better.”

Furthermore, the couple also went for couples therapy for three years which made their relationship even better.

Reimann is expecting her first child. Earnhardt took to Instagram to share the big news among his fans sharing a cute picture of baby shoes on 17 October 2017.

He also revealed that Reimann is expecting a baby girl with a caption:

"Excited to share the wonderful news that @mrsamyearnhardt and I are expecting our first child. A little girl!!!! We are both thrilled and can’t wait to meet her."

Reimann also reposted the same snap on her Instagram and revealed her pregnancy.

Prior to Earnhardt, Reimann was married to Tommy Cook; an assistant defensive line coach at the University of Kentucky.

Reimann and Cook tied the knot in 2008. As per sources, she was still married to Cook when she first met Reimann. Their relationship made into the tabloids as one of Cook's friends said Earnhardt stole Reimann from Cook.

Amy Reimann and her former husband Tommy Cook married in 2008

Cook didn't pass any comments, however, his father confirmed that Amy was in an extra-marital affair with Earnhardt saying:

“My son’s not talking about this. All I can say is that your (Enquirer) story’s true. Amy and Dale have been involved for awhile. My boy’s over it, he’s moved on. But what happened between Amy and Dale was wrong.”