American Competitor Eater Joey Chestnut's Earning Will Surprise You!! How Much Is His Net Worth? 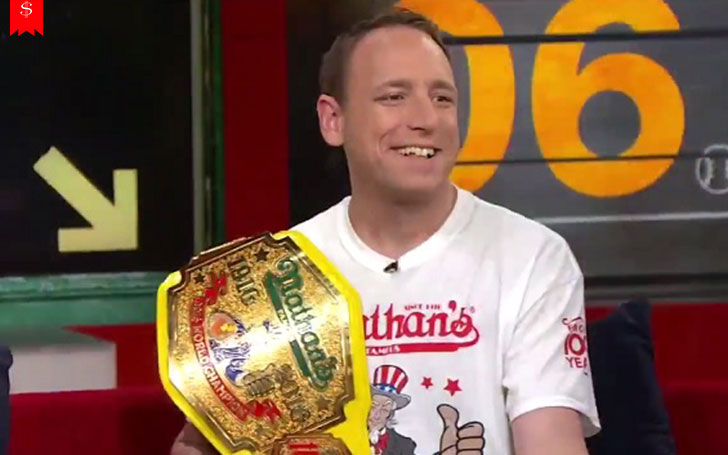 Joseph Christian Chestnut a.k.a Joey Chestnut might have never imagined he would one day become famous for his eating abilities. But the California native is not only famous but also ranked first in the world by Major League Eating.

Chestnut is a competitive eater, who rose to prominence after winning the 92nd Annual Nathan's Hot Dog Eating Contest in 2007 beating six-time champion Takeru "Tsunami" Kobayashi. Does he earn sufficient money from his eating career, or he just indulges his career path? What is his current net worth? We have every detail here.

Eater Joey Chestnut's Net Worth In 2019

The 35-year-old competitive eater made history in 2007 when he ate 66 hot dogs and buns in mere 12 minutes to beat defending champion Takeru Kobayashi in 2007. He won the title again in 2008. In 2009, Chestnut set a new world record of 68 HDB winning his third consecutive world championship.

According to celebrity net worth, Joey Chestnut's current net worth is estimated to be around $1.5 million. Chestnut's net worth is almost half of that of the renowned Japanese eater Kobayashi who has an estimated net worth of $3 million in 2019.

The tabloid further mentioned that a top competitive eater can easily earn $250k to $500k every year from prize money and sponsorships.

Though the eating competition is not so fancy and fans' favorite, The Nathan's Hot Dog Eating Contest winners get $10,000. Chestnut is the 12-time winner of the competition that means he has earned $120k from the competition only.

Moreover, some online sources reported Chestnut has gathered about $600,000, excluding sponsor deals since 2005.

Sporting News reported, Chestnut made a staggering $230,000 from sponsorship deals in 2014 alone. Other details regarding his sponsor deals are not known as of now.

Furthermore, the 6 ft 1 inch-tall American eater also earns from several endorsement deals from a variety of companies as well as from social media sponsorships.

By far, Chestnut is known to have endorsed the companies like Hooters, Hostess, Coney Island IPA and Pepto Bismol on his social media.

Chestnut pledged to donate all of the profits from his condiment line to a military family care foundation, Hidden Heroes.

Talking about Chestnut's properties, he owns a beautiful house in San Jose, California, however, more information regarding the house is not available as of now.