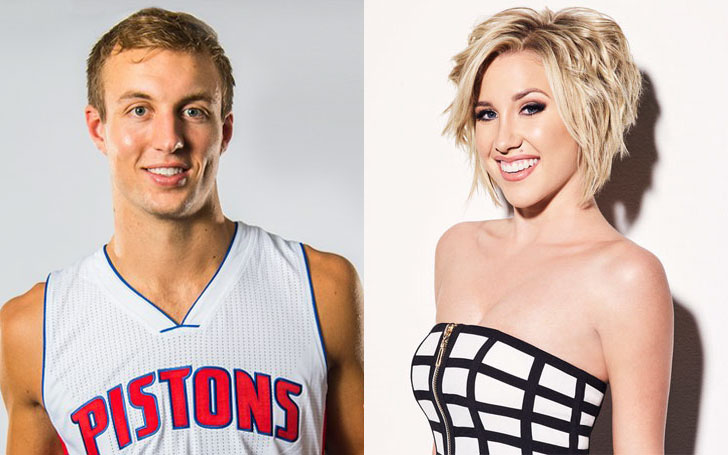 Savannah Chrisley, the daughter of hit Hollywood stars Todd Chrisley and Julie Chrisley is an actress known for featuring on the American reality television series Chrisley Knows Best. Apart from that, she is known for appearing in Sharknado: The 4th Awakens, the 2016 American disaster comedy sci-fi horror television film.

Savannah is currently dating NBA basketball player from Detroit Pistons. The relationship was confirmed after this twosome were spotted together. Let's get to the details!

Savannah Chrisley's New Boyfriend. Who Is He?

Chrisley made her relationships Instagram official on her new beau’s biggest night. Savannah Chrisley took to her Instagram on 22nd June 2017, to confirm that she is in a relationship with the basketball player.

We took over NYC.... and Detroit is next! Thankful for the support she has given me. Beyond blessed with this girl in my life!

Chrisley confirmed her romance with Kennard by posting a sweet selfie with him at the NFL draft. She wrote:

“Yep yall…he’s my guy could not be more proud of him!! Thank you for choosing me @lukekennard5”

It was a memorable day for the athlete- drafted by the Detroit Pistons in an official ceremony where his girlfriend Savannah was with the Kennard’s family to support him.

Luke w/his ladies - We are so proud of you bub!

Savannah’s boyfriend, Luke Kennard shared a photo with Chrisley on his Instagram on 23rd June 2017, writing:

“We took over NYC.... and Detroit is next! Thankful for the support she has given me. Beyond blessed with this girl in my life!”.

Savannah visited Brooklyn’s Barclays Center in order to cheer on her boyfriend Luke Kennard. It seems like things are going well between this team. Currently, Kennard is a shooting guard at Duke University.

Adorable Story Behind How Savannah and Luke Met

Reportedly, Savannah and her family were at a restaurant at Craig’s in Los Angeles having dinner. Luke came in with his agent and his family, their table was right beside Chrisley’s.

After Chrisley’s left, Luke sent Savannah a message on Instagram telling how beautiful she was. Luke had apparently always wanted an opportunity to compliment her. Long story short, they started talking and meeting. Savannah's father Todd thinks his daughter found a good one.

Savannah’s Father Speaks About The Relationship

Savannah’s father, Todd Chrisley is quite vocal about how protective he is over his children, mostly when it comes to who his daughter's date. However, Todd surprised the public with his positive comments about his daughter’s new boyfriend. In an interview with Eonline, Todd admitted:

“When you have children, you pray religiously that your child brings someone home who they’re evenly yoked with that they have come from a similar background. And she has done that”.

“They’re young, whether the relationship turns into a full-fledged, lifelong relationship, who knows! As of right now, if the relationship ended tomorrow, Savannah would walk away from a better woman coz of the impact Luke has on her.”

According to Savannah’s dad, Kennard is a good, decent, honest, and an honorable young man. Luke is very strong and committed to his faith. Even his families are quiet good and decent people. Looks like wedding bells are on the way!