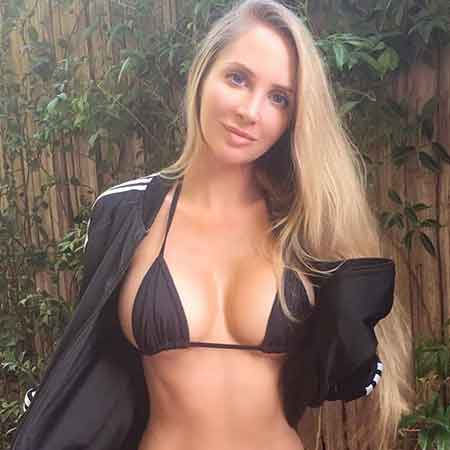 ''Fitness is not about being better than someone else. It's about being better than you used to be.'' Keeping this in mind, the fitness model, Amanda Lee entered into the world of fitness at a very young age. The journey from a skinny girl to a fitness queen was not easy for Lee but her determination and hardworking help her to make her dream true. She is also a popular Instagram model and has around 12.1 million followers as of September 2018. Additionally, She is a certified personal trainer as well as a Pilates instructor.

Amanda Lee was born Amanda Elise-Lee on 13th December 1986 in Canada. Lee is Canadian as per nationality and as far as her ethnicity is concerned, she is White. She is Sagittarius which defines her personality to be curious and energetic.

Lee's mother worked as a fitness instructor to raise her children. Her parents raised her with her four siblings. Regarding her academics, she went to study dance in college after graduating from high school. She later earned a degree in Personal Physical Training and a Pilates Instructor.

As per some online sources, Lee was skinny when she was in high school which made her self-conscious about her looks. She then started working on her physique.

Amanda Lee is a certified personal trainer & pilates instructor by profession. Further, she is also a fitness model who is featured in several magazines and articles. Lee along with Je Selter was featured in an article of Cosmopolitan.

Lee started her Instagram career in May 2014 by posting sizzling pictures. Her bold and attractive body helped her to grab millions of followers.  As of September 2018, her Instagram account has over 12.1 million followers.

Moreover, Lee partnered with EHP labs as a brand amba s sador for the fitness and health supplement company.

Amanda Lee has an estimated net worth of not less than $1 million, however, the actual amount is not made official and is still under review. As per some online sources, a fitness model earns an average salary of $42180.

According to the source, an Instagrammer with followers between 50k to 200k can make thousands per post. Lee currently has more than 12 million followers so we can say she makes over thousands per month.

Moreover, she also makes a good earning from her online site where she sells her meal plan costs $25, and the bodybuilding ebook program is worth $35.

Besides, Lee promotes the fashion store, Fashion Nova on her social media from which she definitely earns a good amount. Many other celebrities like Kylie Jenner, Amber Rose, Nicki Minaj, and Kourtney Kardashian promote the store.

Amanda Lee is yet to be married. She is more focused on her career rather than involving in any serious relationship. She has not introduced anyone as her boyfriend and also has not been spotted anyone on dates. So, with the limited information, she has shared about her love life, she might be possibly single in the present day.

Being a fitness model, she spends much of her spare time in the gym and exercising. She also posts those pictures and videos on her social media.