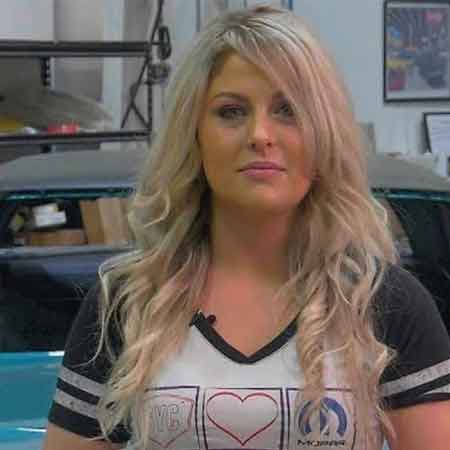 Allysa Rose was born Alyssa Worman in the United States of America to her father Mark Worman. She is the only daughter of TV producer and director of Mark Worman and his wife. She rose to fame after starring in the American automotive reality TV, Graveyard Carz which is created by her father.

Graveyard Carz first hit the TV screen in 2012 in Velocity where they restore the late 1960s/early 1970s Mopar muscle cars. The motto of the show is "It's Mopar or No Car". In 2017, the show aired its seventh season and reportedly makers are preparing for the eighth season.

Allysa Rose's net worth is $500 thousand at present. She is a popular TV personality who rose to fame after starring in Graveyard Carz. She makes a good sum of an amount from the show. She owns a house in Oregon.

Meanwhile, her father Mark Worman's net worth is estimated to be around $500k as of 2019.

Allysa Rose is in a romantic relationship with her longtime boyfriend, Chris Wanke. As per some online sources, the couple has been dating since 2013. The couple's relationship was speculated back in December 2013 after she shared a photo of her with her boyfriend calling him as a family. After the incident, the couple has been sharing several photos from different events. As of now, the duo is living a happy life who also shares a daughter, Brooklyn Monroe Wanke together. Their daughter was born in 2015.

Previously, she dated her Graveyard Carz co-star, Josh Rose. The romantic couple also got married and welcomed their daughter, Emma Rose in 2010. The pair's romantic relationship ended in 2014 when they divorced. According to several sources, the reason for Allysa Rose and Josh Rose's divorce was Allysa's closeness with her current boyfriend Chris, however, no official sources have confirmed the speculation.

Rose is quite active on Instagram where she has 21.3k+ followers as of October 2018. She often shares her family's pictures on Instagram.  As of now, she is living a blissful life in Springfield, Oregon.

She has a German Shepherd. As a TV personality, Allysa Rose has maintained a perfect body and stands at an average height.