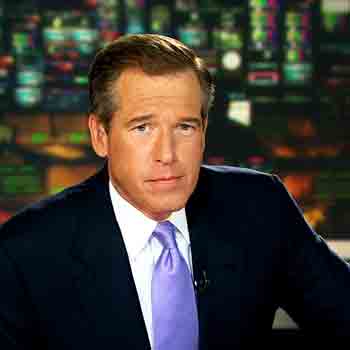 Brian Douglas Williams is the anchor and also a managing editor of the NBC television program called NBC Nightly News since 2004.

Born in the year 1959 May 5 at Elmira, New York, is the son of Dorothy May and father Gordon Lewis Williams, who worked as an executive vice president of the National Retail Merchants Association based in New York.

He has the American nationality a. He has four siblings among which he is the youngest one. Brian Williams finished his junior high in Elmira and then his family moved to Middletown, New Jersey. He has graduated from Mater Dei High, which was a Roman Catholic High School.

He has been grown up in the Irish Catholic home. Whilst being in his high school, he had volunteered as a firefighter for three years in his local township.

Brian Williams had attended Brookdale Community College after which he was transferred to The Catholic University of America and then to The George Washington University. He does not have any graduation but had interned with the administration of President Jimmy Carter which he mentions leaving college was one of his biggest mistakes.

He has a total of 18 college credits. Brian’s first worked at Perkins Pancake House as a busboy. It was in the year 1981 when he first joined the journalism arena. He first worked at the KOAM-TV in Pittsburg, Kansas.

After gaining some experiences, he moved to WWTG as reported where he covered the news in the Washing D.C. He later joined at WCAU in Philadelphia. In 1987, he began to work for WCBS television based in New York. It was in the year 1993 when Brian joined with NBC News.

Brian had joined with the NBC News in 1993 as a reporter and remained in the post till 2004. It was on December 2, 2004; Brian began anchoring the NBC Nightly News which was marked by the coverage of Asian Tsunami and Hurricane Katrina. The shoe began to earn much of the popularity and it stands as the lead since 2008.

His excellent reporting and coverage on hurricane Katrina helped him earned the George Polk Award. Because of his performance and demand, he has got an increase in his salary to the US $10 million annually since 2006 afterward.

Since 2004, he has been anchoring the show in the network. Besides, he was the host of Rock Center with Brian William which got canceled due to low ratings and some issues.

Brian has appeared as a guest in several of the television shows including The Daily Show, Weekend Update, etc. He had made a skit with Canadian sportscaster of CTV Olympic set as he compared his own modest set to CTV’s expensive Olympic set. The activity made media to title the act as “Battle of the Brians.”

He had spoken at the George Washington University commencement on the National hall in 2012 and also been the commencement speaker for Elon University’s graduating class of 2013 as his son was the member at that time.

Brian Williams' Net Worth And Salary

Brian Williams' net worth is $40 million at present. He earns a huge amount of salary from his successful career.

His career took another big leap in 2004 when he became the main presenter of NBC's Nightly News, succeeding journalist and author Tom Brokaw. His initial salary was $8 million per year. It increased to $10 million in 2006. By 2014, his salary had been upped to $13 million per year.

Handsome, talented and a popular figure in media, has reached the age of 55 but still posses the same stamina and enthusiasm as he was in his teens and twenties. Brian is a married man. He is married at the First Presbyterian Church located in New Cannan, Connecticut to Jane Gillan Williams in 1986.

He has two children from his wife, a son named Douglas and a daughter named Allison. His daughter Allison is an actress who stars in HBO’s Girls. He is living a happy life with his family and resides in New Canaan.

Brian has received an Honorary Doctorate of Humane Letters from Bates College in 2005. He is an avid fan of NASCAR car racing’s in both national and local levels.

Also, he is a great fan of New York Giants NFL franchise. A promo for Rock Center with Brian Williams in 2012 had featured a baseball motif with the journalist’s jersey where he wore a similar jersey to the manager of Kansas City Royals, Ned Yost.

To learn more about him, one can find his biography all over the internet. However, his name is similar to many of the famous public figures but involved in different fields. He can also be followed in his Twitter and Facebook accounts so as to gain more information on his recent activities.