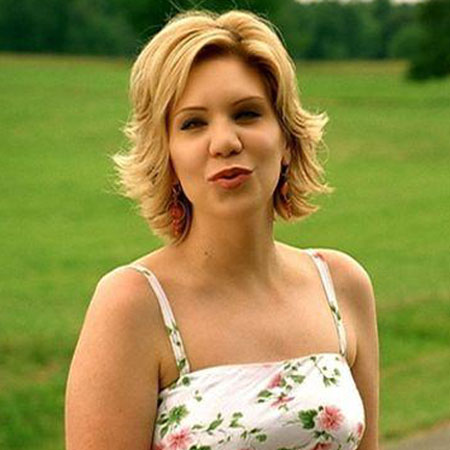 Alison Maria Krauss, an American bluegrass-country singer/ musician, is a member of  Alison Krauss and Union Station (AKUS. She joined the music industry at an early age, winning local contests by the age of ten. She recorded for the first time at fourteen. She signed with Rounder Records in 1985 and released her first solo album in 1987.

She has won 27 Grammy Awards from 42 nominations as of 2018, making her the most awarded living recipient, second only to the classical conductor George Solti, who holds the most with 31 wins. She has been married to musician Pat Bergerson from 1997 to 2001. The couple had a son Sam, born in July 1999.

Alison Maria Krauss was born on July 23, 1971, in Decatur, Illinois. She was born to Fred and Louise Krauss. Her father was a German immigrant who came to the United States in 1952 and taught his native language.

Her mother, of German and Italian descent, is the daughter of artists. She is an American citizen and is of Caucasian ethnicity.

Alison grew up in the college town of Champaign, home to the University of Illinois. She started learning classical violin at age five but soon switched to bluegrass.

Krauss said she first became involved with music because her mother tried to find interesting things for her to do and wanted to get her involved in music, in addition to art and sports.

When she was five years old, Krauss began playing the violin, taking classical lessons. She soon tired of the regimen of classical playing and began performing country and bluegrass licks.

Krauss started her music career at an early age. At the age of eight, she began entering talent contests in and around her native Champaign, IL. Two years later, she formed her own band.

In 1983, when she was 12 years old, she won the Illinois State Fiddle Championship and the Society for the Preservation of Bluegra s s in America named her the Most Promising Fiddler in the Midwest.

In 1985, Krauss made her recording debut on an album, playing on a record made by her brother Viktor, Jim Holies, and Bruce Weiss. The album was called Different Strokes and appeared on the independent Fiddle Tunes label. Later that year, she signed to Rounder Records. She was 14 years old at the time.

Nominated for the Grammy Award

In 1989, Krauss and Union Station released Two Highways, which was nominated for the Grammy Award for Best Bluegrass Recording. Although the album didn't win the award, her next album, 1990's I've Got That Old Feeling, did.

The success of I've Got That Old Feeling was unprecedented for bluegrass acts in the '80s and it laid the groundwork for Krauss' breakthrough in the '90s. By this time, Union Station's lineup had more or less settled.

So Long So Wrong Krauss & Union Station followed the unexpected success of Now That I've Found You with So Long, So Wrong in spring 1997. Forget About It followed in mid-1999.

A year later, Krauss & Union Station joined the likes of John Hartford, Ralph Stanley, and others for the multi-million-selling soundtrack O Brother, Where Art Thou? A North American tour showcasing some of the album's stellar musicians followed in the summer of 2002, allowing Krauss and her band's popularity to soar.

New Favourite appeared in November and went gold within four months. A live album followed soon after, and in 2004 Krauss released Lonely Runs Both Ways. A Hundred Miles or More, a collection drawn from Krauss' Rounder albums, along with sides recorded for various soundtrack projects and five previously unreleased tracks, appeared in 2007.

Also appearing in 2007 was Raising Sand, an acclaimed, multi-platinum collaboration with Robert Plant. She was back with Union Station for 2011’s Paper Airplane, which was self-produced by the band and engineered by Mike Shipley.

In February 2012, Alison won her 27th Grammy Award. She has the most Grammys of any solo female artist in any genre of music. She is now tied for second place with Quincy Jones for most Grammys ever won.

Alison Krauss' net worth is $16 million at present. She is one of the most successful artists of her time, with such great market value. She has earned a huge amount of salary from his career.

At the 76th Academy Awards, she has chosen to wear $2 million Cinderella Sandals.

Alison Krauss is currently unmarried. Previously she was married to Pat Bergeson from 1997 to 2001. Bergeson is a popular musician and guitarist. He has worked with several artists of American music.

The former couple also has an 18-year-old son, Sam, who was born in the July of 1999. Unfortunately, the couple divorced in 1999. After divorcing him, Krauss has not been involved with anyone to date (at least publicly).