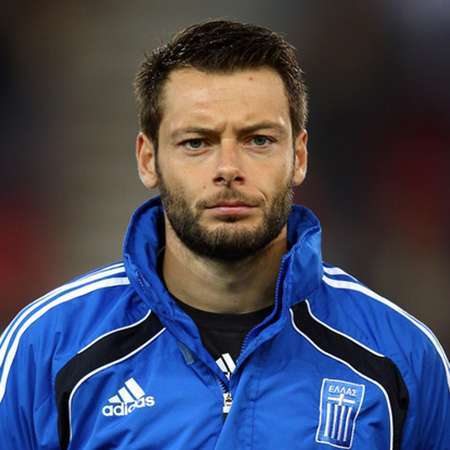 A Greek Goalkeeper, Alexandros Tzorvas, was born in the year 1982 August 12 at the capital city of Greece, Athens. This 31 year old goalkeeper owns the height of 188 cm and body weight of 82 Kg. He was born and brought up in Athens where he finished his schooling. Tzorvas is a married man. He tied his marital vow in 2011 with a lawyer. Chrysavgi Atsidakou is the name of his spouse. There is no any disclosed information about if the couple has got children or any other personal matters.

Tzorvas joined the popular club of Panathinaikos as a starter in his youth career. He debut his professional career from the same team in the year 2001. But because of the tough competition and the team already had experienced and renowned goal keepers he could not make to the first team of the club. However, he appeared in a game from this club and in the rest of the time he was loaned to different clubs namingly Agios Nikolaos from the season of 2001-2003, Markopoulo from 2003-2004 and Thrasyvoulos for the seasons 2004-2005. After the contract been end with Panathinaikos, Tzorvas teamed up with OFI Crete in the seasons 2007-2008. He played in 24 matches from this club with outstanding performance entitling him as a Second Best Greek goalkeeper.

Tzorvas is a great fan of the Club Panathinaikos so upon recall, Tzorvas made his return to Panathinaikos where he appeared in 59 matches giving the excellent performance. Later in the seasons 2011-2012, he appeared in 11 matches with the Italian Club Palermo. After the end of the season, he made his move to Genoa. He played a match in the 2012/2013 season from this club. Tzorvas returned to Greece in 2013 making his move to Current Team of Appollon Smyrni as a free agent to regain his position and fame in Greece. He has played in 27 matches from this club so far wearing the jersey No.30. Tzorvas is also playing for his nation Greece since 2008. He has appeared in 16 games representing his country.

There is any disclosed information on the salary of Tzorvas, but the player’s agent Sports Connection claims his Market value of worth 800.000 Euros. Tzorvas is a talented goalkeeper having the good aerial ability and reflexes to stop the shots in the box. He has good positioning sense that is required to prevent any shots allowing him the maximum potential in stopping the shots and even penalties. He has got good eccentricity and command of the box.

His skills and talent along with the hard work and performance has favored him in achieving the name and fame in the world. He has even gained the experience of playing in 2010 FIFA World Cup and also will be preventing the shots in 2014 FIFA World Cup from the National Football Team of Greece.