Alex Barima is a rising Canadian actor who grabbed worldwide attention for portraying the role of Jonathan in the television series Riverdale. The actor is currently on the headlines for appearing in Resident Alien alongside stars like Alan Tudyk, Sara Tomko, Corey Reynolds, among others.

How Old Is Alex?

Alex was born on 28th May 1991 and is currently 31 years old. He was born in Montreal, Quebec, Canada, and belongs to Canadian nationality. His ethnicity is black.

The actor speaks both French and English and hopes to make an impact on the French-Canadian burgeoning entertainment scene. He studied at the Vancouver Academy of Dramatic Arts.

Professional Career and Net Worth In 2021

As of now, Alex is currently in the headlines for appearing in the new SyFy series Resident Alien. He portrays the role of undercover operative David Logan.

Right upon graduation from the Vancouver Academy of Dramatic Arts, he started his professional acting career. He even had participated in competitive improv for years.

During an interview, Alex opened up that he has always wanted to be an actor. Thus, his dream came true. The actor has appeared in many television series like The Exorcist, The Man in the High Castle, Supernatural, The 100, and Riverdale.

The actor is also equally pa s sionate about voiceover work. He has done voiceover work in Marvel Studios’ Lego Marvel Avengers: Climate Conundrum, Netflix’s The Hollow, and Entertainment One’s series Zoids Wild. He has lent his voice to Zoids Wild for around 25 episodes.

Alex even has worked in the indie film Adventures in Public School alongside stars like Judy Freer and Daniel Doheny. He also has appeared in Disney’s Tomorrowland alongside George Clooney.

As of 2021, Alex Barima’s net worth is reported to be around $400 thousand. The actor earns an annual salary of $35 thousand. He seems to be a fun person. His main source of income is his acting career.

Alex is a rising personality who has around 2,823 followers on Instagram as of April 2021. The actor is neither rumored to be dating anyone nor has captured spending an intimate moment with anyone.

Also, while surfing around his Instagram, he has uploaded many glimpses from his professional activities. He also has uploaded a picture of his mother and a cat pet. He mostly uploads pictures of his co-stars. 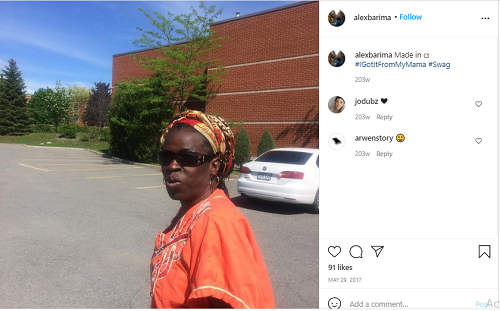 It seems like Alex is single. Also, there is nothing disclosed about his past affairs and relationships. During leisure time, he loves to play video games, anime, and spend time with friends and family.