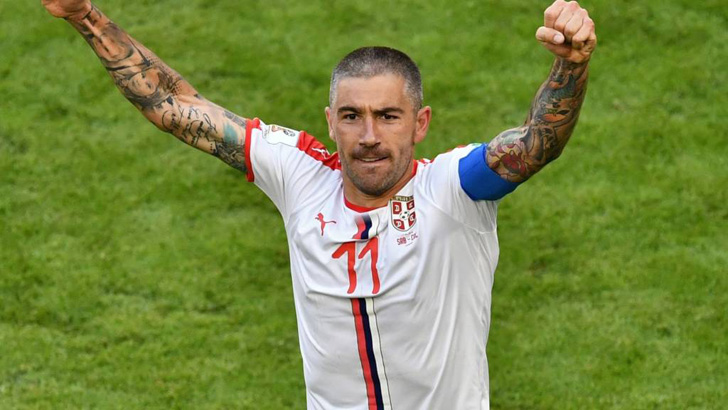 Aleksandar Kolarov is a professional footballer who plays for Serbia and Italian club Roma. He mainly plays as a left-back but can play anywhere in the left flank. In the 2018 FIFA World Cup, he served as the captain of his national team. He scored the only goal in Serbia's first match in the FIFA World Cup 2018 against Costa Rica. Kolarov is known for his speedy run along the wing line and his ability to strike the ball.

In 2014, he came to the limelight due to his extra-marital affair with a Serbian model which lasted for ten years. He is married and has two children with her.

Aleksandar Kolarov was born on November 10, 1985, in Belgrade, SFR Yugoslavia to Zivko Kolarov and Ceca Kolarov.

Kolarov started playing football at the early age and played his first club game for Red Star Belgrade youth team in 1999. He played for the club for five years but never made it to the first team.

Aleksandra Kolarov moved to Cukaricki in 2004, at the age of 18, in which he played in the top-tier Serbia-Montenegro League. He signed a three-year contract with the club. At the end of season 2005-2006, he appeared in 44 games scoring 2 goals.

In February 2006, he joined OFK Beograd where he scored his first league goal.

OFK Beograd sold Kolarov to Lazio in the summer of 2007 for a transfer fee of €925k ($1.07 million). He made his first goal for the club on 30th September 2007 at the Stadio Oreste Granillo. In 2009, he became a part of the team that went to won the Super Coppa Italia and the Coppa Italia.

Kolarov signed a contract with Manchester City for €16 million ($19 million) transfer fee on 24th July 2010. He made his Premier League debut on 17th August 2010 in a 0-0 draw against Tottenham Hotspur.

On 18th January 2011, Kolarov scored his first goal for the team in a 4-2 victory over Leicester City in the FA Cup. He made his first Premier League goal on 2nd February 2011 from a free kick in a 2-2 draw against Birmingham City.

He made his international debut in 2006 playing in the Serbia under-21 squad and was part of the Serbian team that participated in 2007 under 21 Championship. The team made it to the finals, losing 4-1 to the Netherlands.

He was a crucial part of Serbia in the 2010 FIFA World Cup and UEFA Euro 2012 qualifiers. In 2011, he won Serbian Footballer of the Year award for his performance.

In 2018 FIFA World Cup, he scored in the opening match against Costa Rica from a free kick.

Kolarov has played for many reputed clubs earning a decent salary for his service. As of 2018, his net worth is estimated $14 million which he earned from his prolific football career. His annual salary playing for Roma is estimated to be $5 million.

In 2007, he was transferred to OFK Beograd from FK Cukaricki for a fee of £360k. When moving from Lazio to Manchester City, the English club paid a hefty fee of £21.47 million, highest so far in his career.

Kolarov also earns a good sum from his endorsement deal with Nike.

He has a thing for motor cars and owns three luxury including a Mercedes Benz, Bently Continental and a Range Rover totaling to $1.5 million. His other assets include a house in Belgrade, SFR Yugoslavia which he bought in 2012. The market value of the house is claimed to be $1 million.

Kolarov is married to Vesna Kolarov, the pair is married for a long time. The share two children, a son, Nikola and a daughter, Una Kolarov. 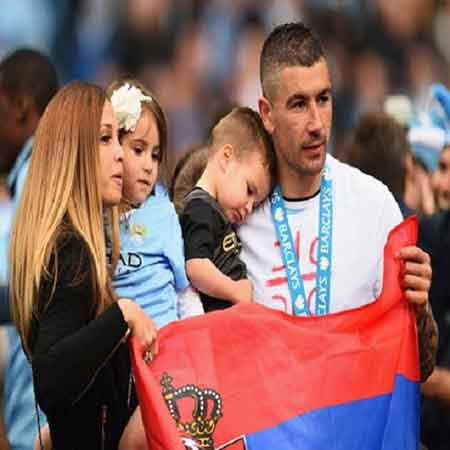 He came into the limelight for his alleged ten-year affair with Serbian model Kristina Mijacevic. According to reports, that Kolarov ended thing with his alleged girlfriend after she got pregnant in 2014. She even told him to leave his wife and children for her. Now, the couple seems to be on good terms and also lets Kolarov visit his alleged son Petar.

Here is the video which shows the skills of Aleksandra Kolarov: