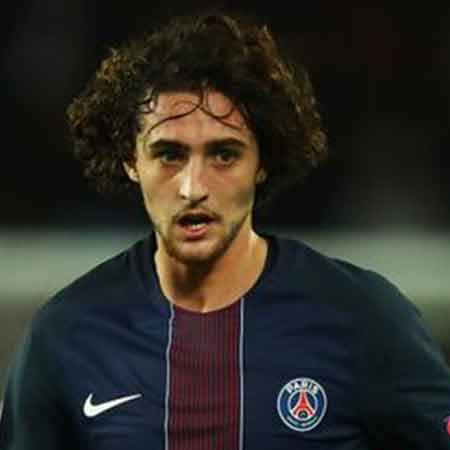 The French professional footballer Adrien Rabiot is one of the accomplished center midfielders who boasts a crazy midfield skills, technical and ball-playing ability as well as accurate passes. He currently plays for the French professional club Paris-Saint-Germain and France national team in the aforesaid position.

His association with the club PSG helped him to win multiple prestigious accolades and huge fame. He has been playing with the club since his debut in 2012 and successfully won 15 major honors, including four consecutive Ligue 1 titles and a treble in 2015–16. The footballer made his full international debut in 2016.

Adrien Rabiot was born on 3 April 1995, in Saint-Maurice, France. He is the son of Michel Rabiot and Veronique Rabiot. He started playing football joining the youth setup Creteil-Lusitanos at the tender age of 6.

After two years with the club, Rabiot went on to play for many youth academies like Alfortville and Manchester City, where he spent a few months.

Adrien Rabiot signed a three-year contract with the French professional club Paris Saint-German, on  2 July 2012. The manager Carlo Ancelotti promoted him to the senior team for the new 2012-13 season. And he made his Ligue 1 debut playing in a 0-0 draw match against Bordeaux, on 26 August.

On 6 November, Rabiot played his first UEFA Champions League match against Dinamo Zagreb. At the beginning of 2012, he was loaned out to fellow league side Toulouse and registered his first professional goal on 9 March 2013.

Rabiot scored two goals and provided three assists from 17 appearances across all competitions. Following his came back to Paris Saint-German, they triumphantly won domestic leagues from 2013 to 15. In the 2015-16 season's opening match against Lille, he was given a red card.

On 25 November 2015, in the Champions League group stage against Malmo, the footballer netted his first European goal which ended in a 5-0 win for the side.

Having represented France in various youth-levels, Adrien Rabiot made his full international debut as a substitute for Thomas Lemar after 78-minutes in the friendly match against Ivory Coast, on 15 November 2016.

On 17th May 2018, Rabiot was named one among the 5 standby players by the manager Didier Deschamps in the 23-man squad for FIFA World Cup 2018 but the player denied to be listed in the standby list, emailing the coach and saying he would not,

"He made a bad decision. He penalizes himself and sanctions himself alone."

Through his endorsement deal with several big companies and especially his club's salary, Adrien Rabiot has made a hefty amount of money which as per estimation made by various online sources is speculated to be more than $6 million.

Adrien Rabiot is not dating anyone at present. Judging by his social media, the footballer seems more focused on his career as he often posts a picture along with his teammates. In his pleasure time, he is found enjoying in Paris, Gym, Swimming pool, hills, mountain station.

Besides, Rabiot is a dog person and is a owner of two dogs and frequently shares snaps via Instagram of them.