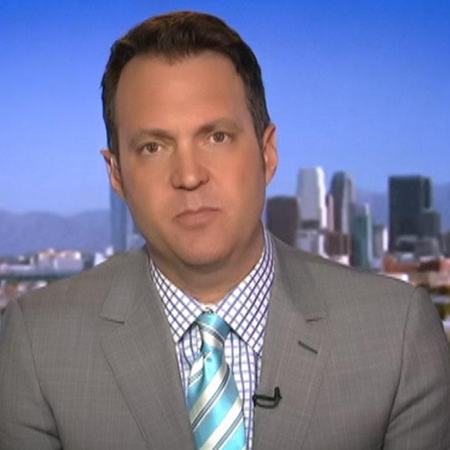 Adam Housley, an American journalist, is currently working as a senior news correspondent for Fox News Channel. He is also a former professional basketball player. Adam is the winner of Emmy and AP award.

Adam is one of the American reporters who reported about the devastation 9.0 earthquake and subsequent tsunami in Japan in 2011.

Adam Housley was born as Arthur Adam Housley in the year 1971 on 13th of August in Napa, California, United States.

Adam joined Pepperdine University and graduated with double bachelor degree in political science and telecommunications in 1992. Later, in the year 2014, he enrolled at the University of Arizona where he received MA in International Security.

While Adam was in the Pepperdine University, he played National Champion College World Series Baseball Team and played two summers for Harwich in the Cape Cod League. He was also a Pitcher and hitter of a Junior Olympic All-American baseball player.

Adam Housley began his career as a news reporter in a radio station called KVON-KVYN radio! where he developed and produced newscasts.

Later, from 1997 to 1998, Adam was a live reporter for KCPM-TV (NBC) in Chico, California where he received a California Department of Forestry Award for capturing a wanted 50,000-acre arsonist.

Moreover, Adam was also the lead reporter for KFTY-TV an independent station in Santa Rosa, California, from 1988 to 2000.

Adam appeared in KTXL-TV (Fox) as a reporter in Sacramento, California from 1999 to 2001. He received an array of awards including the 2001 Regional Associated Press Reporting Award and a Regional Emmy Award.

Housley was the lead reporter of FNC for Arnold Schwarzenegger in 2003 campaign and has reported six hurricanes; Rita, Katrina and filed more than 45 stories from Mexico and the southern border.

Adam  Housley was the first reporter permitted aboard the US warship USS Erie during a defense missile launch in Hawaii in 2007. In 2009, he provided live video coverage from Venezuela of the protests against Hugo Chavez.

Apart from his TV career, prior Adam played the professional baseball and was picked by Montreal Expos. He played for Milwaukee Brewers and Detroit Tigers Minor League organization.

Adam Housley is a married man. He is married to Tamera Mowry since 2011. The couple is blessed with two children; Aden John Tanner born on November 12, 2012, and Ariah Talea Housley, on July 1, 2015.

Adam’s wife Tamera Mowry is an American actress and a model. Currently, she is the co-host of The Real. He was criticized for the interracial marriage since he is white and his wife is half black.

The couple together participated in Cupcake Wars' on The Food Network in 2016 and won the show. They donated the winning amount to the charity Snowball Express.org which helps children of fallen U.S. military members.

According to a source, Fox pays annually average salary ranges ($50K-$100K) to its anchors.