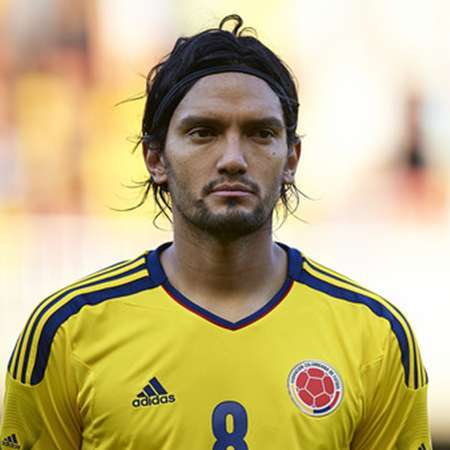 Abel Enrique Aguilar Tapias, popularly known as Abel Aguilar is a Colombian professional footballer, born in the year 1985 January 6 in the city of Puerto Bogota, Columbia. Abel Aguilar stands at the height of 185 cm and weighs around 80 Kg. He was born and brought up in Colombia.

Abel Aguilar is a right footed attacking midfielder who is popular for his magnificent style of blocking the ball. He is good at giving shots and has strong pa s ses. He is skilled in aerial duels and ball interception. He is young, energetic and full of strength. He has amazing control on the ball and dribbling skills. He plays as a central midfielder from his Current Team at a French Club Toulouse from squad No.21 and from the first Team of his Nation Colombia in Colombia National Football Team. According to the statistical salary record of 2012, his salary was recorded to be 700,000 Euros. Abel Aguilar owns the market value of worth 2,750.000 Euros at present. Europe Sports Group is the agent for Abel Aguilar.

Abel Aguilar started his professional career from the Seria A club, Deportivo Cali. He appeared in 102 matches from the club till 2005 scoring 3 goals. Later in 2005, he was signed up for Udinese. Immediately after signing him, he was loaned to the fellow league team Ascoli Calcio 2005. Due to the problems raised in the arrival of transferred player, he never got the opportunity to play in this club and even missed the training. After his return to the Udinese team in 2006, he got the opportunity in playing in 2 matches, one in a league match and one in UEFA Cup.

In the year 2007, he was loaned to the Spanish second division club Xerez. He appeared in 48 matches from the team as a first choice in the team bagging 3 goals. In the seasons of 2008-2009, he was loaned to another Spanish club called Hercules where he experienced playing in 34 games with 9 goals. After his return in the Udinese club, he was again loaned to another Spanish Club Zaragoza in 2009/2010 seasons. There, he appeared in 27 matches bagging 4 goals.

After the end of this season and contract with Udinese, he signed the contract with Hercules in 2010. This move made him return to the top division after 13 years of long gap. Hercules loaned him to Deprotivo La Coruna for the seasons 2012/2013 where Abel Aguilar appeared in 28 matches with 3 goals. Altogether he played in 73 matches from Hercules making 4 prominent goals. After the release of his contract from Hercules, he made his move to the current team of Toulouse in 2013. Abel Aguilar is in the National Football Team of Nation Colombia since 2004. He has appeared in 45 capped matches from the team bagging 6 goals so far.

Prior, he was married to a journalist named Natalia Restrepo. After dating for years, the couple tied the knot in 2014. His former wife, Natalia filed for divorce in 2017 citing irreconcilable differences. As of 2018, he is single and is not involved in a serious relationship.