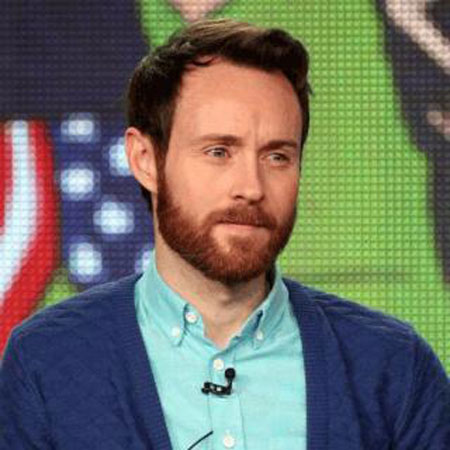 Born and raised in Fresno, California, Aaron Ruell is a well known American director and photographer. He gained worldwide fame following his significant role as socially awkward, Kipling "Kip'' Dynamite in the comedy film, Napoleon Dynamite. In 2005, he earned a Teen Choice nomination for his role Kip too. He is also known for her his work in TV series Super Robot Monkey Team Hyperforce Go! and Napoleon Dynamite.

Aaron Ruell was born Derek Aaron Ruell on June 23, 1976, in Fresno, California. He is American and belongs to the White-American ethnicity.

Ruell attended  Clovis West High School. He worked as missionaries for Latter-day Saints (LDS Church) to Guatemala but is no longer active in LDS.  He also studied film at Brigham Young University.

Aaron Ruell started his career as a photographer. Later, he enrolled in direction and made his directorial debut with a title sequence of Napoleon Dynamite in 2004.

Ruell directed the commercials for brands like T-Mobile, Nintendo, Coke, Burger King and many more.  As a director, Ruell is represented by Biscuit Filmworks in Los Angeles.

Ruell also directed the most controversial ad showing the Amish drag race between two hay ball-carrying, horse-drawn carts. The cart carrying 10 bales of hay marched forward while the cart with 50 bales slacks behind. At the end of the ad it said, Powerade Option, a low-calorie sports drink. The ad was pulled out from the air due to a dispute between Coke(owns Powerade) and Pepsi(Gatorade) but at last, coke settled out of court.

Recently, Shoot Magazine declared him as one of the most promising new directors in the world of advertising and Creativity called him, "one of the emerging directors to know now".

Ruell was the only filmmaker whose both movies,  Everything's Gone Green and Mary, premiered at the 2005 Sundance Film Festival.

In 2004, Ruell made his acting debut with the movie Napoleon Dynamite where he played the role of  Kipland Dynamite. He earned the Teen Choice nomination for his role.

Ruell starred in On the Road With Judas as New York businessman who led a double life as a computer thief. The movie premiered at the 2007 Sundance Film Festival. In 2012, she was a cast in animated sitcom Napoleon Dynamite alongside Efren Ramirez, Tina Majorino, Sandy Martin.

Aaron Ruell's Net Worth, Salary, And Major Source Of Income

Aaron Ruell is one of the successful commercial directors has played several major roles in both TV series and movies. As per celebrity net worth, he has an estimated net worth of $1 million as of 2019.

Ruell is a popular photographer and his average salary is above $76k per annum. Similarly, he earned between $130k to $180k as a commercial director.

Aaron Ruell is happily married to his girlfriend, Yuka Ruell. She is also an actress best known for her appearances in movies like Napoleon Dynamite (2004), Bad Boys II (2003) and Gentlemen Broncos (2009).

Aaron and his spouse Yuka tied the knot in an intimate ceremony which was held in the presence of their closed friends and families. As per some online sources, the duo first met on the set of Napoleon Dynamite but no official confirmation has come about it. To the date, the two do not share any child. The couple has notoriously kept secret about their married life.

Currently, Ruell resides in Prasena, California along with his wife, Ruell. Together, the two often seen walking in Fresno's neighboorhood. The couple has been together for a long time and still sharing the strong bond of love with no such conflict.

Below we present the video of Aaron Ruell