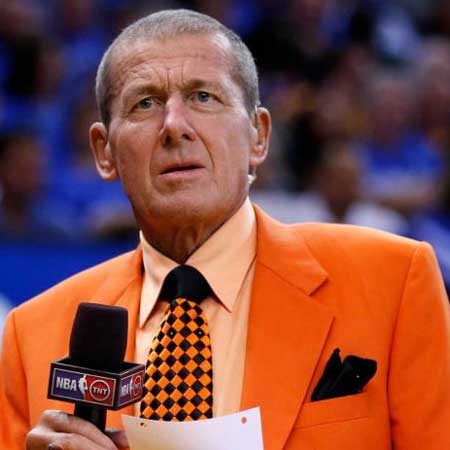 Craig Graham Sager Sr. was a well-known reporter and reputed personality. He was an exuberant sideline reporter for National Basketball Association television broadcasts. He was widely known for his outlandishly garish outfits as for the questions he asked the coaches and players.

Sager died on December 15, 2016, at the age of 65, due to acute myeloid leukemia. He worked for CNN and its sister stations TBS and TNT covering an array of sports from 1981 until the year of his death.

Sager was born on June 29, 1951, in Batavia, Illinois, the U.S. He holds American nationality belonging to White ethnicity.

Sager attended Batavia High School. He gained recognition writing an essay entitled "How and Why I Should Show Respect to the American Flag" in a patriotism contest sponsored by the American Legion in 1966.

Sager moved to the Northern University in Chicago, graduating from the University earning a bachelor's degree in Speech. He was a member of the Delta Tau Delta fraternity.

Sager started his career as a reporter for WXLT, now WWSB-Channel 40, in Sarasota, Florida. He began working as a radio news director in 1974, earning $95 a week for his efforts.

Sager joined CNN for full time in 1981, co-anchoring the network's CNN Sports Tonight shows. He became a winner of CableAce Award in 1985, for his efforts.

Sager also served as a sideline reporter for the NCAA Men's Division Basketball Championship, both for Turner Sports and CBS with Marv Albert, Chris Webber, and Len Elmore.

He was loaned to NBC Sports in 1999, where he served as a field reporter for both NBC's coverage of the National League Championship Series and World Series.

Sager had maintained an incredible net worth of $9.5 million. He had earned a huge amount of salary throughout his career, as his earning from his work was $1 million. He was active on Twitter and Instagram. He had posted several updates regarding his work on his Twitter account.

Sager was a beloved member of The Turner family for more than three decades. He has been a true inspiration to the people. His incredible talent, tireless work ethic and commitment to his craft took him all over the world covering sports.

Moving to his personal life, Sager had five children altogether from two marriages. He married Lisa Gabel, who was from Chillicothe, Missouri in 1980. The couple together had a son named Craig Sager Jr. and two daughters named Kacy Sager and Krista Sager.

Craig Jr. was a walk-on wide receiver at the University of Georgia. He has filled in for his father as a sideline reporter during his absence in 2014 whereas his daughter, Kacy, was employed by Turner Sports. There is no information about the divorce of this couple.

Soon after, Sager married Stacy, a former Chicago Bulls dancer after an affair for several of years. He has altogether two children; Ryan and Riley from his second wife, Stacy Sager.

Sager was diagnosed with acute myeloid leukemia in April 2014, due to which he missed the entire 2014 NBA Playoffs. He underwent the treatment, pushing his cancer into remission.

In March 2016, Sager announced that his leukemia had returned and had three to six months to live without treatment, as told by the doctors. He suffered the process for the third time through the gift of marrow from an anonymous donor.

Sager died on December 15, 2016, at the age of 65. He battled a rare form of cancer for more than two years, undergoing multiple rounds of chemotherapy and other treatments.

Sager worked 26 seasons as a sideline reporter for Turner Sports’ NBA broadcasts on TNT, making a name for himself with his colorful suits and oft-stilted interviews with longtime San Antonio Spurs coach Gregg Popovich during TNT’s NBA broadcasts.