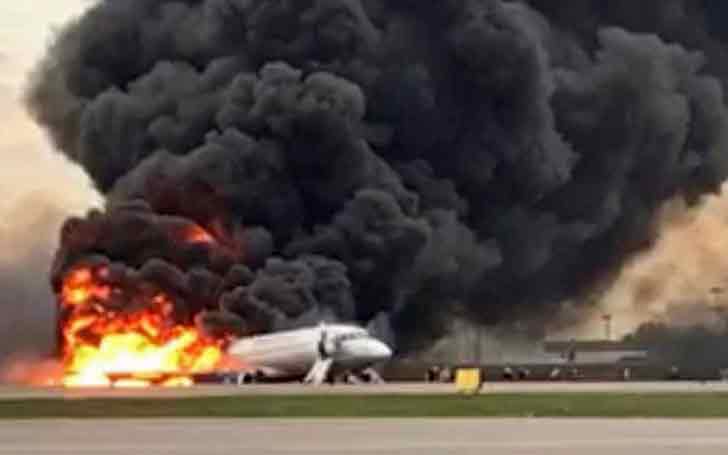 Forty-one people have lost their lives in a tragic plane crash in Moscow airport that occurred after the Aeroflot caught fire and burst into flames during an emergency landing. The plane had just taken off from Moscow's Sheremetyevo airport.

The jet that carried 73 passengers and five crews on board was struck by lightning, one of the survivors said, however, Russia's national carrier said the plane returned to the airport because of some technical issues. 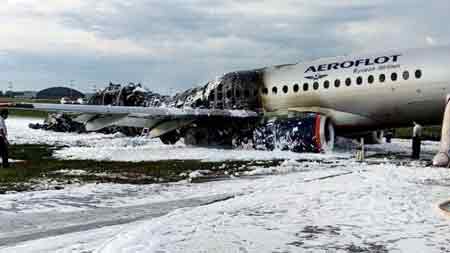 CAPTION: Rear part of the plane completely burnt in the fire SOURCE: BBC

Aircraft, a Sukhoi Superjet-100 took off from the airport to Murmansk at 6:02 local time. The crew sent a distress signal after "malfunctions" in the aircraft just a few minutes after the take-off and made an emergency landing. At the landing, the plane's rear side caught fire on the runway before it burst into flames.

One survivor, Petr Egorov told a newspaper that the "landing was rough" and he almost passed from fear. A newly emerged video showed passengers jumping from the airplane as the rear side of the plane caught fire and started to explode on the runway.

Yelena Markovskaya, an official involved in the investigation of the crash told,

There are 37 survivors-33 passengers and four members of the crew.

Sources reported, a flight attendant was also killed in the crash and five people are in a hospital where others remained unharmed.