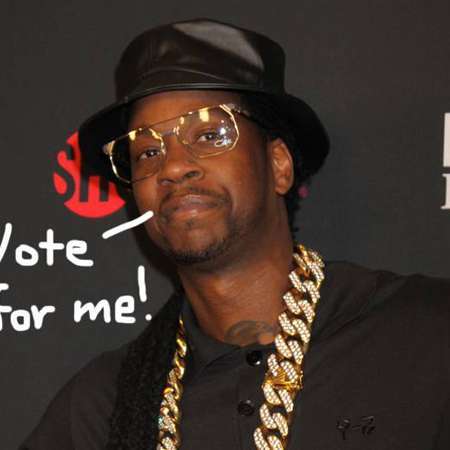 2 Chainz is one of the prominent faces in the world of music. His gained initial fame after he became the part of the Southern hip hop duo Playaz Circle. The rapper has released a number of hit and popular albums like  B.O.A.T.S. II: Me Time and many others.

2 Chainz was born on September 12, 1977, as the only child. His father was in and out of prison a lot of times during his childhood, so his mother raised him alone. In an interview with The Urban Daily, he said “The fact that my mom raised me, used to bother my pop. He didn't know if a woman could raise a man. And they'd have differences of opinions all the time.

After his father’s death, he revealed that losing his father was very heartbreaking and hard for him as he lost someone he could trust, confide in and communicate with, but the experience also made him stronger and independent.

For education, 2 Chainz attended North Clayton High School and graduated second in his class. He graduated from Alabama State University, where he got in on a scholarship to play for the Hornets Basketball Team.

During high school, 2 Chainz formed the hip hop duo “Playaz Circle” with his fellow rapper, Dolla boy. At the time, he was known as Tity Boi, a moniker he gave himself to represent being the only child his mom breastfed. The duo met fellow Atlanta rapper, Ludacris, when he moved into their College Park apartment complex. After a few records with Ludacris, the duo signed to his newly formed record label, Disturbing the Peace, a subsidiary of Def Jam Recordings.

2 Chainz, formerly known as Tity Boi, is an American Rapper from College Park, Georgia. His real name is Tauheed Epps. He is one of the two members of the Southern hip hop duo, Playaz Circle, the other member being his fellow rapper, Earl “Dolla Boy” Conyers. They are best known for being signed to rapper Ludacris’ Disturbing Tha Peace label. They are also renowned for their debut single “Duffle Bag Boy”.

Their Debut Album Supply and Demand was released on October 30, 2007. Their debut single “Duffle Bag Boy” became an urban hit single. The duo released their second studio album “Flight 360: The Takeoff” on September 29, 2009, and in January 2010, they filmed a music video for their single “Big Dawg” featuring Lil Wayne and Birdman. 2 Chainz left Disturbing the Peace, a move he claimed was taken so he could advance in his career.

In early 2011, he changed his stage name from ‘Tity Boi’, a name frequently speculated by critics and fans alike to be derogatory, to ‘2 Chainz’, which he perceived to be more ‘family friendly’. He then released a mixtape entitled T.R.U REALigion. This was his first mixtape to hit the charts, peaking at number 58 on the US Billboard Top R&B/Hip-Hop Albums chart.

On March 24, 2012, 2 Chainz announced his debut studio album, Based on a T.R.U. The story, which debuted at number one on the US Billboard 200, selling 147,000 copies in its first week. On May 23, 2013, he announced his second studio album ‘B.O.A.T.S. II: Me Time’ to be released on September 10, 2013. The album featured guest appearances in various songs from  Pharrell Williams, Fergie, Drake, Lil Wayne, Pusha T, Mase, Chrisette Michele, Iamsu!, T-Pain, Dolla Boy, Rich Homie Quan, and Lloyd among others.

The album's production was handled by Diplo, Mike WiLL Made It, Drumma Boy, J.U.S.T.I.C.E. League, Mannie Fresh, Wonder Arillo, Da Honorable C-Note, and DJ Toomp among others. It debuted at number three on the US Billboard 200, and number two in the Top R&B/Hip-Hop Albums chart selling 63,000 copies in its first week. On October 23, 2013, he revealed his third studio album.

On January 6, 2015, 2 Chainz announced that he was starting his own independent record label "The Real University" (also known as "T.R.U."; or "The Real U"). In November 2015, he revealed that he was releasing a joint album with Lil Wayne, titled ‘ColleGrove’. 2 Chainz’s official YouTube channel 2Chainz has over 3.14 million subscribers.

2 Chainz's Net Worth, Salary, And Major Source Of Income

2 Chainz has collected a large amount of money from his illustrious career. His estimated net worth as per celebrity net worth is around $6 million, in 2019.

The artist has also a self-titled YouTube Channel called 2 Chainz which has over 3.14 million subscribers as of 2019. It is also the major part of his net worth as he can make in the between of $29.7 K-$474.4 K a year from the channel.

2 Chainz is in the relationship with NaKesha Ward and has three children: 2 daughters, Heaven and Harmony and a son, Halo. He and his fiancé haven’t been married yet. Famous celebrities often have a lot of rumors revolving around them. 2 Chainz has confirmed that the robbery at Atlanta was just a rumor spread by others.

In mid-2018, the couple got engaged. The rapper surprised his longtime girlfriend Ward after he proposed on the famous Metropolitan Museum of Modern Art.

2 Chainz has had a lot of legal issues in his life, his first conviction being at the age of 15 for felony cocaine possession. In his life, he has been arrested for marijuana possession, narcotics possession, unlicensed gun ownership, etc. He has even been robbed at gunpoint outside a medical marijuana dispensary in San Fransisco.

2 Chainz's Age, Height, And Other Facts