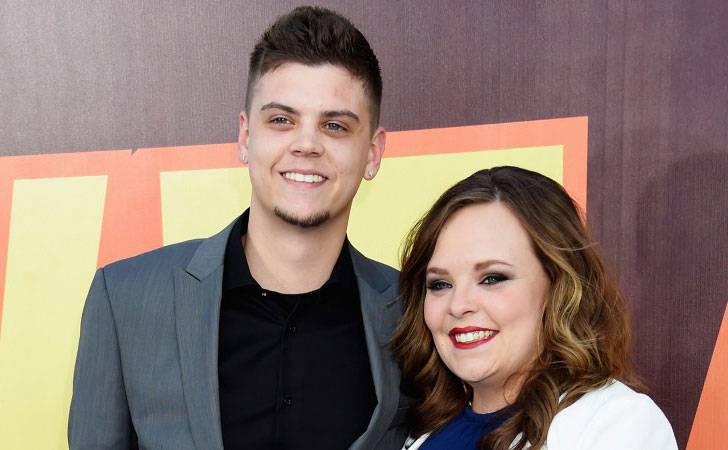 The Teen Mom OG star Catelynn Lowell's family is expanding again. Lowell, 25, announced on Monday's episode of Teen Mom OG that she has been expecting her third baby with husband Tyler Baltierra.

The MTV reality star couple already has a daughter Novalee Baltierra, 3 and Carly Baltierra, 8, whom they gave up for adoption after her birth in 2009. Lowell and Tyler both were only 16 when they welcomed their first daughter.

According to People, Lowell, who just removed her IUD on last week's episode, took a pregnancy test in the toilet of a restaurant where she went with her friend Hayley and Hayley's son, Kingston for lunch.

People say Catelynn revealed she didn't have a pregnancy test at home as her husband Tyler could have questioned her about what was going on.

It was not revealed about her pregnancy on the Monday's episode; however, the MTV cameras captured the moment when Lowell told her husband that she was pregnant with their third child.

Catelynn Lowell and Tyler Baltierra with their daughter Novia

Catelynn made her husband surprised by having Nova wear a pink T-shirt with ''I'm Going to Be a Big Sister'' written along its chest. Tyler asked Catelynn as he read the phrase,

Why do we have that shirt?

Well, because she's going to be a big sister.

Tyler responded her immediately with ''No she's not.''

Catelynn rebutted, saying, ''Yeah, she is."

Tyler continued, "No, she's not" while keeping the smile on his face. Catelynn said,

I'm not lying, I swear to God," and walked away.

Oh my god, you have to be on drugs right now.

Lowell spent around six weeks in the rehab in late 2017 after she suffered suicidal thoughts, stemming from postpartum depression. She returned home before the New Year, however, within days, she returned the rehab.