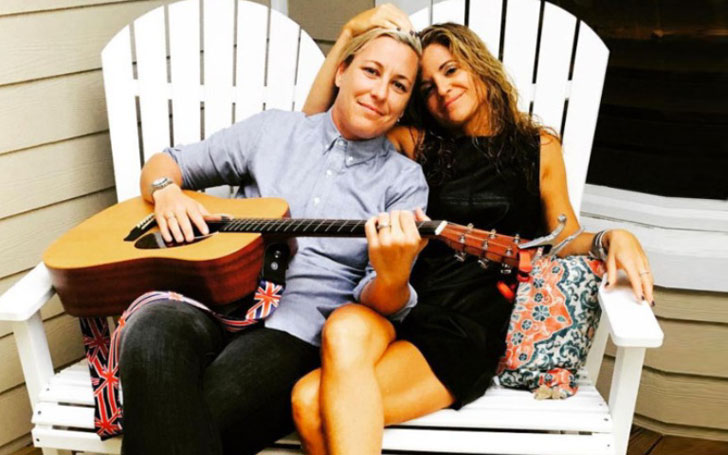 Abby Wambach and Glennon Doyle started dating from 14th November 2016. Just after around three months of dating, the couple got engaged on 17th Feb 2017. Wambach had been divorced from Sarah Huffman for only nine months at the time. Let's hope Wambach found her love this time!

After almost three months (to be exactly two months and 26 days) of their engagement, Abby Wambach and Glennon tied the knot on 14th May 2017. The couple exchanged the vows on the Mother's Day in a secret wedding ceremony. They have shared their happiness on their respective social media accounts. Congratulations to the newly married couple! Have a look…

When I fell in love with Abby, I was scared. I thought that my fear might be bigger than my courage, and that because of that size difference, I might miss out on my chance at happiness. This was so painful. One day, I was talking to my dear friend Martha Beck. I told her that losing this love would be painful, but that I was used to learning from pain. And Martha said: "Honey. It's true that God teaches us through pain. But it is also true that God tries to teach us through joy first. You can keep choosing heartbreak and pain, Glennon. But you can also choose joy. God can use that choice too. And I actually believe that God prefers to use joy to teach us." And so, for once, I chose joy. I have lived a long while learning from pain and God, it's been a good teacher. I'm forty one, now. And I'm graduating to joy. I choose joy. You can, too. First the pain. Then the rising. Your courage is bigger than your fear. Love, G (Ms. Doyle-Wambach if you're nasty) @abbywambach @elizabeth_gilbert_writer @marthabeckauthor

My beloveds - please never give up on love. Life could surprise the hell out of you. Trust me- you might just wake up one morning and find yourself smackdab in the middle of heaven. I love my wife. LOVE WINS. @abbywambach #DoyleWambachAF

Same-sex marriages and relationships are just like any other, they go through break-ups and divorces as well! ISpeaking of same-sex marriages, Wambach was previously married to American soccer player Sarah Huffman.

After many years of dating, the couple tied the knot on 5th October 2013. The couple got married at Villas at Po'ipu Kai on the island of Kauai. Only a few close friends and the family member got a chance to attend their special day.

Sadly, just after almost three years (exactly two years and 11 months) of their marital life, the couple separated on 12th September 2016 and filed in the initial petition on September 28. The couple went through numerous hard times and were on the rocks in their marriage.

Their problems only heightened when Wambach was arrested for drunk driving. She was arrested for DUI on April 3rd in Portland, Oregon. Later, she pled guilty and has been now sober. In one of the interviews, she claimed:

That night getting arrested was one of the best things that have ever happened to me. Because if I don't get so publicly shamed and publicly humiliated, I don't think I wake up.

However, after facing divorce from Sarah Huffman, Abby Wambach is now happily married with her new wife. There is no doubt that the couple is spending a quality time. For more updates on this marriage and fresh celebrity gossip, keep coming back to Article Bio.