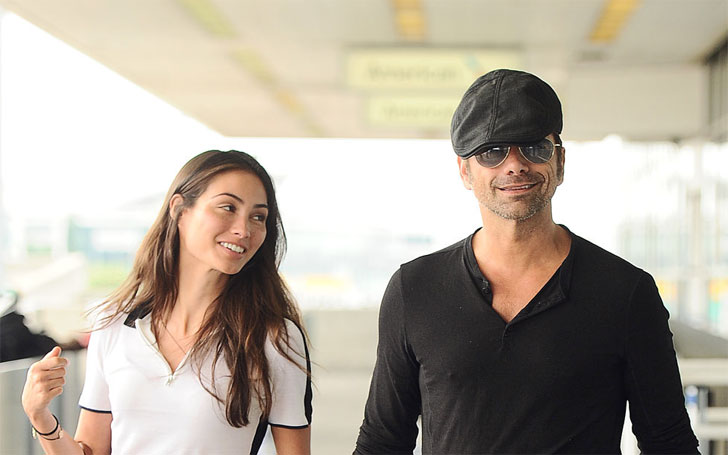 They are engaged!! The sitcom icon, John Stamos is engaged to his year-long girlfriend, Caitlin McHugh. To many, it might seem like a rushed decision, given that they have been together only for a year, but when you know something for sure, why wait? Right?

Stamos does have a sour history though; he's had a divorce from his ex-wife  Rebecca Romijn. But, seems like he is ready for his second marriage! This should be interesting. Let's get into it.

John Stamos could not hide his excitement that his girlfriend Caitlin McHugh accepted his proposal and took Instagram to announce his engagement.

Also, is there any better way to introduce your girlfriend  than with this caption:

I asked...she said yes! ...And we lived happily ever after?

Dear Stamos, we sure do hope this time is the happily ever after! Let's cut him slack here because Stamos is serious this time; he had been planning this proposal for quite long.

Stamos had already had planned the proposal with some amazing Disney elements, as he is a big fan!

Even though the couple is quite low-key when to comes to their personal life, it seems that they couldn't stop expressing their love and happiness after the engagement.

And, Caitlin McHugh's caption will give you all the feels, the newly engaged McHugh posted a photo on Instagram with a caption:

I kissed the boy and said...yes! That’s what you do when the sweetest, most romantic Prince Charming treats you like a princess and asks you to be his

Honestly, that could be one of the sweetest captions to an engagement photo ever!

At the time, they are probably the cutest couple in the Hollywood. What do you think? Here's how the proposal all went down:

John Stamos and his then-girlfriend now fiance, Caitlin McHugh, have immense love for Disney. That is why Stamos took so much effort to plan a Disney themed proposal.

Stamos' representative Lara Spencer spilled all the details about the proposal to Good Morning America!

He put together some of the most romantic moments from Disney and Pixar animation [in a video]. And then he ended it with Sebastian from The Little Mermaid saying, ‘Just ask the girl’ to John.

She said yes and we couldn’t be happier for both, He was a bachelor for a long time. I guess he had a lot of ideas and wanted to get it just right.

Now the only wish we have right now is to see the wedding pictures of John Stamos and Caitlin McHugh real soon.