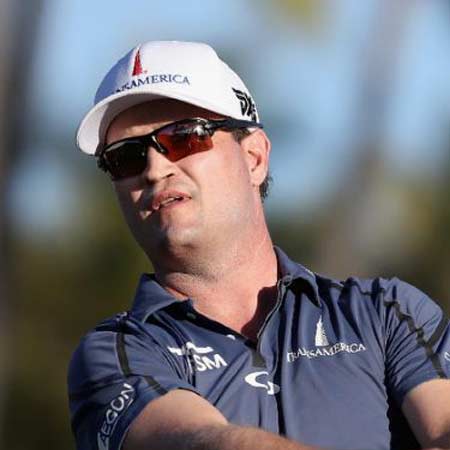 Zachary Harris Johnson is a professional golfer who has won 12 matches on the PGA Tour, including two major championships.

Early Life and Education of Johnson

Johnson was born on February 24, 1976, in Iowa City, Iowa, U.S. He is an American player who belongs to the white ethnic background. He is the son of Julie Johnson (his mother) and Dave Johnson (his father). He currently lives in St. Simons Island, Georgia, U.S., with his wife and children.

Born in Iowa, He was raised in Cedar Rapids playing many sports such as baseball, basketball, football, and soccer. He played golf for the first time at the age of 10 and started developing his skills at Elmcrest Country Club.

He joined Drake University in Des Moines and played as the number two player on the Drake golf team. He led the Bulldogs to three NCAA regional meets and two Missouri Valley championships during his time in the University.

He put his first step towards his professional career in 1998. He started playing golf on the developmental tour circuit including the Prairie Golf Tour, the Buy.com Tour, and the Hooters Tour. He won the final three regular seasons of the Hooters Tour in 2001. He topped the money list on the Nationwide Tour earning $494,882 and got promoted to the PGA Tour.

Johnson won his first PGA Tour event held at the BellSouth Classic in 2004, finishing one stroke ahead of Mark Hensby. He recorded numerous impressive results that include two runner-up places and third place at the WCG-Accenture Man Play Championship in 2006. He is qualified for the U.S. Ryder Cup team for the first time in 2006 and finished ninth on the U.S. points list.

He won his first major title on April 8, 2007, held at the Masters Tournament in Augusta. This victory took him from #56 to #15 in the world's ranking and was the first to win the Masters in the history of rankings. He made his victory for the third time on tour held at the AT & T Classic, just six weeks after winning the Masters.

He has won overall 12 PGA Tours, which includes 2015 Open Championship, 2014 Hyundai Tournament of Champions, 2013 BMW Championship and many other major events.

Johnson has reached the age of 41 now and has been a very successful play in short period of time. Golf used to be his hobby from his childhood, which later became his professional career. His father, Dave is a chiropractor who has helped him a lot throughout his career.

He got married to Kim Barclay in 2003. They met a few years ago and married after having affairs for several of years. The couple has altogether three children, two sons named Will and Wyatt and a daughter, Abby Jane. He currently lives in St. Simons, Georgia with his beautiful wife and children.

Johnson's Net Worth and Salary

He stands 5 feet 11 inches and weighs 160 pounds. He is one of the high paid players having a wonderful net worth of over $5 million.

He has his own social service foundation, The Zach Johnson Foundation that is located in Cedar Rapids, Iowa. The Foundation is dedicated to helping children and their families in Cedar Rapids. The couple has helped to raise $700,000 for the community agencies serving children.