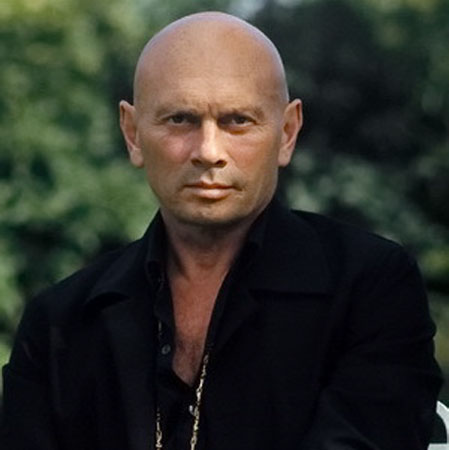 Academy Award-winning, Yul Brynner was a Russian movie and stage actor. He has done a variety of roles in films and theatre in his career. He was not just an actor but also a performer who impressed millions of viewers with his wide range of talent, bustling energy, impeccable looks and charming self.

Brynner was married four times, and his first three marriages had ended in divorce. He had four children from his marriages.

Brynner was born to Boris Yuliyevich Briner, a mining engineer, and Marousia Dimitrievna. He had a younger sister, Vera Bryne.

Brynner's father had an extramarital affair. His father’s extra-marital relationship led him to be under the care and guidance of his mother who took the children to Harbin, Manchuria. Therein, Brynner attained formal education in a school run by YMCA.

Brynner's mother shifted to Paris in 1932 fearing a war between China and Japan. There, he became musically inclined and began playing guitar in Russian nightclubs.

Brynner trained himself as a trapeze acrobat and worked in a French circus for three years. His back injury which forced him to leave the job and take up a new career. It was then that he turned to acting.

In 1940, along with his mother, Brynner migrated to the US and started living in New York City.

During World War II, Yul Brynner started working as a French Speaking radio announcer and commentator at the Office of War Information in the U.S., broadcasting propaganda to occupied France.

Brynner also trained himself in acting, learning under Russian acting coach, Michael Chekhov. He then toured the country with Chekhov’s theatrical troupe.

Brynner made his debut on stage with a small role in the Shakespeare’s Twelfth Night. He then worked in television series, ‘Mr. Jones and His Neighbour’ followed by the 1946 production of Lute Song with Mary Martin.

In addition to acting, Brynner also took up various modeling assignments. He turned to direction with the new CBS TV studios, Studio One. He also featured on the first television talk show, ‘Mr & Mrs.’ He made his debut in the big screen with 1949 film noir crime film, ‘Port of New York.’

Having a successful career as a TV director, Brynner resisted acting proposals. But, succumbing to the pressure by Mary Martin, Brynner auditioned for the role of ‘King’ in American musical film, ‘The King & I’ in 1947.

‘The King & I’ brought him immense critical acclaim. He portrayed King Mongkut for the movie version in 1956 and a short-lived TV version on CBS in 1972.

After the grand success of ‘The King & I,’ Brynner was cast in some other movies. He gained the superstar status with his roles in the movies, ‘The Ten Commandments’ and ‘Anastasia.’

Brynner’s brilliance in acting, exotic persona and indefinable accent led him to do roles in some other movies including ‘Solomon and Sheba,’ ‘Taras Bulba’ ‘The Magnificent Seven,’ and ‘Kings of the Sun.’

At the end of his acting career, Brynner played a titular role in the movies, ‘The Ultimate Warrior’ followed by ‘Death Rage’ in 1976. His last league of movies includes Michael Crichton's ‘Westworld’ and its sequel ‘Futureworld.’

Brynner did not just limit his talent to acting and direction and instead ventured forward as a photographer, author as well as a guitarist.

In his lifetime, Brynner penned two books, ‘The Yul Brynner Cookbook: Food Fit for the King and You’ and ‘Bring Forth the Children: A Journey to the Forgotten People of Europe and the Middle East.’ Both the books comprised of photos that Brynner had taken.

As a guitarist, Brynner recorded some songs in the movies, ‘The Brothers Karamazov’ which released in 1967 ‘The Gypsy and I: Yul Brynner Sings Gypsy Songs.’

Yul Brynner had been married four times fathering five children out of which two were adopted.

In 1994, he tied the knot with an actress, Virgina Gilmore with whom he shared a son, Rock Yul Brynner (born December 23, 1946). He nicknamed his son Rock when he turned 6 in honor of boxer Rocky Graziano.

The couple tried their best to save their relationship but failed at the end and divorced in 1960. Later, Brynner was romantically involved with Frankie Tilden, who was 20 years older than him. He fathered a daughter, Lark Brynner with Tilden.

In 1960, Brynner exchanged vows with Doris Kleiner, a Chilean model on the sets of The Magnificent Seven. They separated in 1967. He shared a daughter,  Victoria Brynner (born November 1962).

Brynner had his third marriage with Jacqueline Thion de la Chaume who is a French socialite, in 1971. He adopted two Vietnamese children: Mia (1974) and Melody (1975) with his then-wife,  Jacqueline.

The pair couldn't handle their relationship and had divorced in 1981. However, the reason behind the divorce was reported to be Brynner's negligence towards his wife and kids.

At the age of 62, Brynner married Kathy Lee who is 28 years younger than him.

The duo first met on the sets of The King and I and tied the knot in 1983. They had been together for two years when Yul Brynner took his last breath.

A few days after his death, anti-cigarette public service announcement was shown on all the major US TV networks and in many other countries.