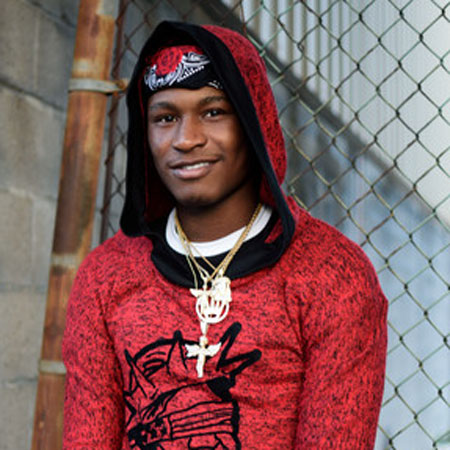 Young Goldie is a multitalented person. He is a rapper, photographer, videographer, graphic designer, and dancer. He debuted his career at the age of 4.

Goldie was born as Amin Saddiq Trayvon Peters on 8th April 1996 in Baltimore, Maryland to mother Hilda Ellison. He holds an American nationality and belongs to the Black-American ethnicity/race.

Goldie started to rap at the age of 4 with an independent label called 3rd Exit. He appeared in a local school in Baltimore for his primary education.

During his childhood, he pa s sed through some tragic family problems. The problem resulted his mother being hospitalized and his father behind bars. Despite the problems, he still managed to participate in school talent shows and local events in his city until he was 12.

Goldie has a great attachment with his hometown, which can also be seen on his social media. He started his career in his hometown. He was pa s sionate in musical career from his early childhood days, which led him to pursue a career in music.

Within months, Goldie released his second hip-hop album 'Dream Come True.' He brought the album in a s sociation with 'Austin Music Group.' The album was released on June 23, 2015. The album contained 14 songs; included the songs like 'Intro,' 'Checks,' 'Wanna Fu**.'

Goldie has taken a long break since the release of his second album. In this period, he has released music videos for his tracks 'I Did It Do It,' 'Rage,' and 'Stop Hating on Me.'

Goldie has reached the age of 21. His birth sign is Aries. His unique rapping styles and talents have grabbed the attention of his fans.

As far as Goldie's personal life, he is not married till date. Despite the popularity, he has managed to keep his personal life low profile.

The 21-year-old rapper is focusing only on his career currently, which might have kept him away from being in the relationship or having affairs.

Goldie is an active user of social media and has thousands of followers on his Instagram account. He frequently shares his events and appearances on social media.

However, Goldie hasn't yet taken his steps to share his personal life on social media. He has not talked about having an affair or girlfriend in the past.

Goldie has earned a decent amount of money from his career. He has maintained a good net worth in his life.