Ever since Yon González, a Spanish actor made his acting career debut in 2006 through the TV series SMS (translated: Sin miedo a soñar), his career success is sky-rocketing. Best known for playing Iván Noiret León in The Boarding School, González records 18 acting credits in 2020 & has already placed himself among aspiring acting figures.

His notable role as Julio Olmedo in Gran Hotel (2011- 13) earned him Fotogramas de Plata Award and a  nomination for Neox Fan Award. Furthermore, the actor gave a howl of his acting prominence through appearances in Bajo sospecha (2014- 16) and Cable Girls (2017-20).

When and Where Was Yon González Born?

Born on May 20, 1986, in Vergara, Guipúzcoa, País Vasco, Spain, the Spainsh actor's birth name is Yon González Luna. He has an older brother named Aitor González Luna, an actor most notably known for apperance in Paco's Men (2005- 2009).

Yon is reportedly fluent in Basque and Spanish and is working on to improve speaking English.

Career In Acting- Breakthrough With 'The Boarding School'

In 2006, Yon González was cast as Andrés in the comedy-drama series SMS (translated: Sin miedo a soñar) that marked the start of his professional acting career. Soon after, the actor got his career breakthrough with the role of Iván Noiret León in the mystery series The Boarding School (El internado); there he worked from 2007 to 2010 in 71 episodes starring Marta Torné, Martiño Rivas, and Carlota García.

The series earned him an Association of Latin Entertainment Critics Award in the Best New Actor category.

After appearing in 13 episodes of Gran Reserva (2011), González hit further wide acclaim with the portrayal of Julio Olmedo in Gran Hotel (2011-13, 39 episodes) alongside Adriana Ozores and Amaia Salamanca. From 2014 to 2016, Yon worked as Víctor García in Bajo sospecha (18 episodes).

The Spanish actor made his feature film debut in 2009 with Sex, Party & Lies (Mentiras y gordas) and starred in the romance-thriller Rage, the same year. Thereafter, González worked in Torrente 4 (2011) and Transgression (2011) that followed his film appearances in The Misfits Club (2014), Off Course (2015), and Matar el tiempo (2015).

Most recently, he was cast in Death Knell (Hil-Kanpaiak) in 2020 & is set to appear in Érase una vez... Euskadi (2021) as a lead role alongside Arón Piper, Ruth Díaz, and Luis Callejo.

Did you know? In 2011, the 20 minutos listed him as 6th among the Sexiest Spanish actors. He walked in Cibeles Madrid Fashion Week 2007 & has modeled for magazines such as Glamour, Vanity Fair, and Cosmopolitan.

Who Is Yon González Dating In 2020? Girlfriend Name?

Yon González  was formerly in a relationship with a girlfriend named Natalia from 2008 to 2009. Reportedly, he began dating his Cable Girls co-star Ángela Cremonte after they met in 2017 but broke up after a year, in 2018.

Ever since the Spanish actor has barely many any official announcement on his dating life or relationship status. He is never married as well & is allegedly single in 2020. 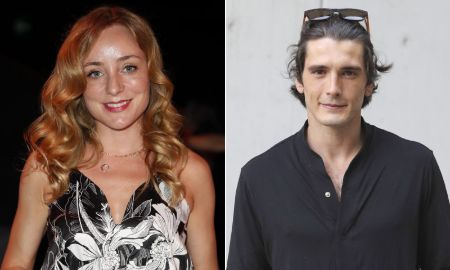 CAPTION: Yon González and his ex-girfriend Ángela Cremonte; they broke up after a year of dating SOURCE: Hola

Back in 2013, González made highlights regarding his relationship as his Gran Hotel co-star & on-screen love interest Amaia Salamanca kissed each other on the red-carpet moment of Bambú Production 5-year anniversary. However, neither of them commented if they are dating off-screen & the issue vanished in no time.

The actor had an on-screen romance with Blanca Suárez in Cable Girls; they know each for 10 years & is in a great friendship. Although fans are hoping if their togetherness could bloom charisma of love, as it's not a surprising issue in the world of celebrity.

Active in the acting industry for over 14 years, Yon indeed has gathered a considerable sum and fame. Online sources claim that González owns a net worth of $1.5 million in October 2020, most notably thanks to his work in Cable Girls, Gran Hotel, and The Boarding School. The salary of an actor in Spain ranges from €31,000- €51,000 per year.