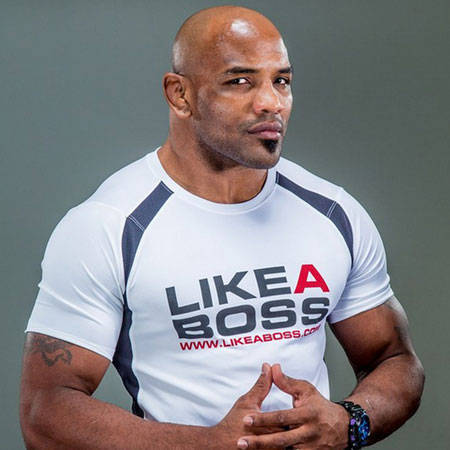 Yoel Romero Palacio aka Yoel Romero is a well-known Cuban mixed martial artist (MMA) and former World Champion and Olympic silver medalist in freestyle wrestling. Currently, he is the prominent fighter of the middleweight division in UFC.

Yoel Romero was born on April 30, 1977, in Pinar del Río, Cuba where he spent most of his life playing with his brother Pablo Hernández, who is currently a Cruiserweight Champion in professional boxing. He is of Cuban nationality while his ethnicity is black.

As per the source, he is graduated with a Bachelors's degree in Sports Science.

Romero was great at wrestling and used this potential to make his career. Romero went on to compete in the 2000 Summer Olympics on behalf of his home nation, Cuba from where he won the silver medal in the freestyle competition. Four years later, he took part in the 2004 Summer Olympics where he finished in 4th place.

He was also successful in winning a gold medal at the 2003 Pan American Games, a quadrennial competition that was held the year before the Olympics. Romero was a participant in many of the FILA Wrestling World Cup where he came first many times. Romero went on to hone his skills in Wrestling, Brazilian jiu-jitsu  and has the Southpaw stance. He also took part in the Grand Prix of Germany in the summer of 2007, and as expected, won it. After that, Romero worked towards training himself in mixed martial arts and thus in December 2009, he made his professional mixed martial arts debut.

On April 20, 2013, Romero went on to make his UFC and middleweight debut on Fox 7 against Clifford Starks at UFC. Later, on June 27, 2015, Romero fought against Lyoto Machida at UFC Fight Night 70. He successfully knocked out Machida at 1:38 of the third round with a series of elbows from top position. For his incredible performance, Romero was awarded a "Performance of the Night" bonus. Additionally, he played against many and won in several matches, making him more famous than ever. Romero previously competed in the now-defunct Strikeforce organization. Yoel currently competes in the middleweight division of the Ultimate Fighting Championship (UFC) and has been placed at #3 in the official UFC middleweight rankings.

How Much Is Yoel Romero Net Worth?

The MMA player, Yoel Romero collected the worth of $2 million.

Romero, who is also named as the soldier of God, is reluctant to speak about his private life. The 42 years old, Romero is a married man and has shared three kids: two daughters, and a son. However, the detail on his marriage and the name of his wife is missing.

Currently, the family of five is living in Miami without any bad rumors in the media.

Recently, Romero had allegedly ranted about the legalization of same-sex marriage in the United States which made him lose a lot of fans. However, he apologized about the controversy and made it clear to the media that he did not mean to speak against same-sex marriage and it was merely a misunderstanding. He said that, "No forget Jesus" but was interpreted as "No for gay Jesus" as his English is not good.

Romero weighs 84 kgs and stands tall at the height of 5' 10". He has a well-built wrestler’s body. He currently resides in Miami, Florida and is fighting out of Coconut Creek, Florida. He is working with the American Top Team. Romero has already taken part in 11 matches in the mixed martial arts category and has lost only 1.