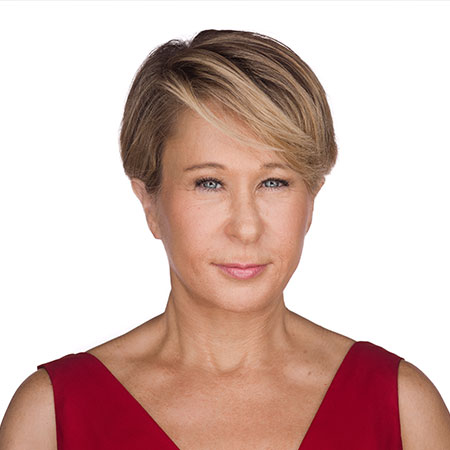 Notable for her high-pitched nasal voice, Yeardley Smith is an American actress, writer, and artist. She is very popular for her long-running voice acting role of Lisa Simpson on the animated television series The Simpsons. She often became part of the bully due to her unusual voice when she was a kid, but coming to 2019, she has received numerous awards including a Primetime Emmy Award in 1992.

Yeardley Smith was born on July 3, 1964, in Paris, France under the zodiac sign of Cancer. Her father’s name is Joseph Smith, he worked for United Press International in Paris and later moved to Washington D.C. in 1966.

Her mother’s name is Martha Mayor, who was a paper conservator for the Freer and Sackler Galleries at the Smithsonian Institute. Yeardley was born with an extraordinary voice due to which she was often teased by her friends during her childhood.

Yeardley debuted in her acting career in a sixth-grade play. In 1982, she began her professional acting following her graduation from a drama school. She also joined the local Arena Stage theater group on an apprenticeship, featuring in their production of Peter Pan.

In 1984, she moved to New York City and made her appearance in the Broadway production of Tom Stoppard’s play The Real Thing along with Jeremy Irons and Glenn Close. Her first film role was in Heaven Help Us in 1985. The same year, she also worked in The Legend of Billie Jean, an American drama film. Later, she played as Connie in Stephen King’s Maximum Overdrive in 1986.

In 1986, she moved to Los Angeles seeking better opportunities in her acting career. There she made several appearances in the theatrical productions of Living on Salvation Street. She played the role of Louella Waters on the Showtime series Brothers. Later, she was cast in a movie Ginger Ale Afternoon.

Besides, she has also worked as a voice actor. In 1987, she voiced the character, Lisa Simpson, in the American adult animated sitcom The Simpsons. In 1991, she became one of the lead cast members in the American sitcom Herman’s Head when she was still working on The Simpson. Some of the television series she has worked on so far include ABC Afterschool Special, Brothers, Murphy Brown and Rugrats. She has also voiced the character Lisa Simpson in the video games of The Simpsons.

Yeardley Smith has an estimated net worth of $65 million as of 2019. As said earlier she is an actress as well as a voice actress. She has appeared on many movies and television series so far. According to the reports, she started getting $30,000 per episode after she started voice acting for The Simpsons.

In 2008, the payment even increased and she started earning $400,000 per episode. After three years, Fox threatened to cancel the series unless production costs were cut. After that, all the voice actors accepted a 25% pay cut and were downed to $300,000 per episode.

Yeardley Smith currently 54 years. She is not married as of present and not known to be dating any man at present. Before she got into the single status, she was married and divorced twice. She first married an English-Canadian actor Christopher Grove.

They tied the knot in 1990, but their marriage could not last for long and they filed for divorce in 1992, citing irreconcilable differences. After filing a divorce from her first husband, she remained single for some years.

In 2002, she married Daniel Erikson at an intimate wedding. The couple spent their happy conjugal life for around five years before they started facing problems in their marriage. She filed for divorce from her second husband Erikson on May 21, 2008, citing irreconcilable differences.

Besides, Yeardley loves to paint and indulges her pa s sion whenever she gets free from her hectic work schedule. She has also written a children’s book I, Lorelei which was published in February 2009. In 2001, Yeardley launched a women’s shoe line Marchez Vous.

Well, she makes all kinds of posts on her Insta and Twitter, which include her personal and professional life.