Wilson Radjoue-Pujalte is a teen British actor famously known for playing the role of Dara on Netflix's The Witcher in 2019. He is also known for portraying Dodger in the drama series Dickensian in 2016. His other critically acclaimed projects are Hunter Street, Pan, and Hetty Feather.

Wilson Radjou-Pujalte was born on May 15, 2002, in England, under the birth sign Taurus. He is British by nationality and Afro-British by ethnicity.

The teen actor is currently 17 years old. He stands at a height of 5 feet 9 inches. There is no information about his parents and family background.

He Played Dara In The Witcher: Other Movies & TV Shows

Wilson Radjou-Pujalte made his debut appearances as an orphan in the adventure-comedy film Pan in 2015. That same year, he appeared in Murdah Lovers John.

In 2016, Radjou-Pujalte starred in the drama television series Dickensian alongside Sophie Rundle, Alexandra Moen, and Joseph Quinn. In the same year, he was cast in Barbarians Rising and Jamillah and Aladdin. 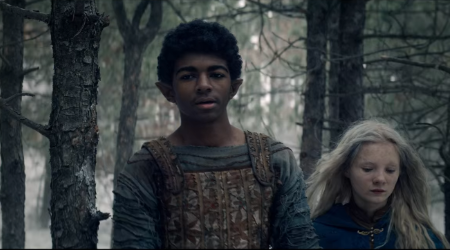 Subsequently, the teen actor joined the cast of drama-family TV series Hetty Feather in 2017. He worked on the television series along with Polly Allen, David Knight, and Susan McArdle.

Wilson Radjou-Pujalte Is Worth $500 Thousand

Wilson Radjou-Pujalte, 17, is a renowned teen actor who acc u mulates a good chunk of fortune from his acting career. As of January 2020, the teen actor has a net worth of around $500 thousand.

In 2019, Radjou-Pujalte was cast in Netflix drama The Witcher for which his cast-mate Henry Cavill was making $400 thousand per episode.

Is Wilson Radjou-Pujalte Dating Anyone?

The Witcher actor, Wilson Radjou-Pujalte is too young to get married. The young actor has also not disclosed if he is single or dating a girlfriend.

Unlike other celebrities, he doesn't use any social media websites, which makes us even hard to trace out his personal life.

The 17-year-old actor is currently focusing on his acting career rather than love affairs. Wilson currently resides with his family in England.