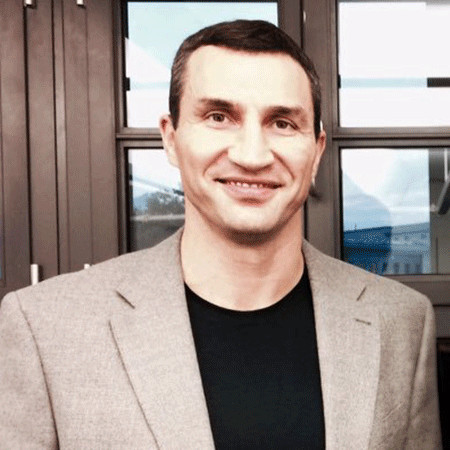 Vitali Klitschko is a renowned former boxer and is a Ukrainian politician. He is the fourth boxer besides Muhammad Ali, Evander Holyfield, and Lennox Lewis to win a heavyweight belt for three times. He is also the first professional boxer to have the Ph.D. degree.

Ukrainian boxer and politician Vitali Klitschko is a very talented and renowned personality. Born on July 19, 1971, in Belovodsk, Kirghiz SSR, Soviet Union, now a part of Kyrgyzstan, Vitali Vladimirovich Klitschko, is the eighth longest reigning heavyweight Champion of all time. He has never been knocked out or knocked down in his professional boxing career. He has set the highest knockout percentage of 88.37% in heavyweight boxing champions.

Vitali Klitschko is a son of Vladimir Klitschko who was a Soviet Air Force Colonel and Nadezhda Ulyanovna, his mother, was an attendant. He has a younger brother named Wladimir and is known for their strong brotherly bond. As a child, he has traveled much of the Soviet Union with his family and has spent almost whole childhood in the army garrisons. He is a graduate of Pereyaslav-Khmelnytsky Pedagogical University and has completed his master’s degree from National Academy of State Administration of the President of Ukraine.

Vitali Klitschko is a married man. He is married to his girlfriend Natalia Egorova who is also a sports person. She is a former athlete and model. They met in Kiev and got married in 1996. The couple is blessed with three children, Daniel born on 2000, Elizabeth-Victoria born on 2002 and Max born on 2005. The family is living currently in Kiev, Ukraine.

Vitali Klitschko and Wladimir are known as Klitschko brothers. They are proud to be a Ukrainian and they are friends with world-renowned personalities including Bill Clinton, Mohammad Ali, Jon Bon Jovi and many others. Both the brothers are Ph.D. holders and speak Russian, Ukrainian, German, and English.

Also known as Dr. Ironfist, Vitali Klitschko has won three world heavyweight boxing champions standing the fourth boxer to make this record. He stepped back from boxing since 2013December 15. However, he was announced champion emeritus meaning he can fight directly in the WBC Heavyweight Champion if he wants to return to boxing.

Vitali Klitschko has received numbers of awards and recognition for his record holding professional boxing career. Vitali was paid a handsome salary and has the net worth of 20 million Euros.

Soon after his retirement from professional boxing, Vitali Klitschko started campaigning for Mayor of Kyiv in 2005. He was appointed as the full-time adviser to President Yushchenko in 2006. He also participated in 2006 mayoral election and stood second with 26% of votes. Then he began an anti-corruption platform being associated with PORA party where he got elected as a deputy to the Lev City Council.

In 2008, Vitali Klitschko got appointed into Ukrainian delegation of the Congress of the Council of Europe where he assisted in improving country relations of Ukraine and Germany.  Later in 2010, he became the leader of Ukrainian Democratic Alliance for Reform and as of May 25, 2014, he has been serving as a Mayor and head of Kiev City Administration.

Vitali Klitschko along with his Wladimir earns millions for their joint venture in different projects. They own a firm called KMG where they organize and engages fights of the brothers earning them 3-5 million dollars overnight. They are associated with “Mercedes”,” Hugo Boss”, “Telekom”, “Eunova”, and fitness network “McFit”. Both the brothers are real estate owners as well.

Having the worth in millions, the Klitschko brothers are also engaged in charities. They have founded the international fund “Sports-XXI century” in 1997 to support the talented athletes, coaches and sports veterans who are in need of help. Vitali Klitschko is the chairman of “Klitschko brothers Foundation”. The brothers also have supported the schools, churches, and needy children and have been supporting UNESCO since 2002.