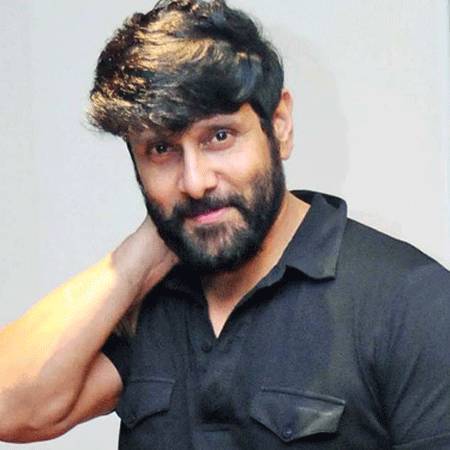 Vikram did his schooling at Montfort School, Yercaud. The school which emphasizes extra curriculum honed multiple skills in sports, music, and theater, where his love of drama and a pursuit of a dream was nurtured. His parents wanting him to do his graduation after finishing his final high school year, he completed his graduation in English from Loyola College, Chennai and followed with an MBA degree

Vikram is an Indian film actor who predominantly appears in Tamil language films. He has won six Filmfare Awards till date, one National Film Award and Tamil Nadu State Film Award. He was awarded an Honorary Doctorate by People's University of Milan in May 2011. Vikram established himself as one of the leading contemporary actors in the Tamil film industry.

Vikram debuted in the film Meera in 1990. Following its release, the film did not run well at the box office. Vikram still accepted subsequent offers he received and saw his first hit film, Sethu in 1999. Sethu was Vikram's first blockbuster though he made his debut almost a decade earlier. The film grossed over Rs.50 million at the box office. Vikram's second blockbuster Dhill came in 2001. His next blockbuster Gemini came the very next year in 2002.

Dhool and Saamy both came in 2003 and yet were top grossing films of the year. Also in 2003 was the critically acclaimed Pithamagan which earned him the National Film Award for Best Actor. His successful performance prompted S. Shankar to cast him for his high budgeted Anniyan. He received a Filmfare Best Tamil Actor Award from the movie Anniyan. Along with Telugu as for all his films, the film was also dubbed in French and Hindi, which made his Bollywood debut.

Vikram later appeared in Majaa which did not do well at the box office. Three years later, in 2008, his film Bheema released, also receiving critical acclaim. Then later he worked in the film Kandaswamy which is directed by Susi Ganesan and has been released & did a good business at box office.

Vikram is married to Shailaja Balakrishnan. He met her when he was on crutches after the accident in the 1980s. After few years of dating her as a girlfriend, he married her in Guruvayoor and later at the church at Loyola College in 1992. His wife Shailaja Balakrishnan is from Thalassery, Kerala. She is a psychology teacher. The couple gave birth to a daughter named Akshita and son named Dhruv.

Vikram has estimated net worth of $ 20 Million. He takes $300 thousand per movie as his movie fee.